Cheers and tears as Gauff given harsh lesson 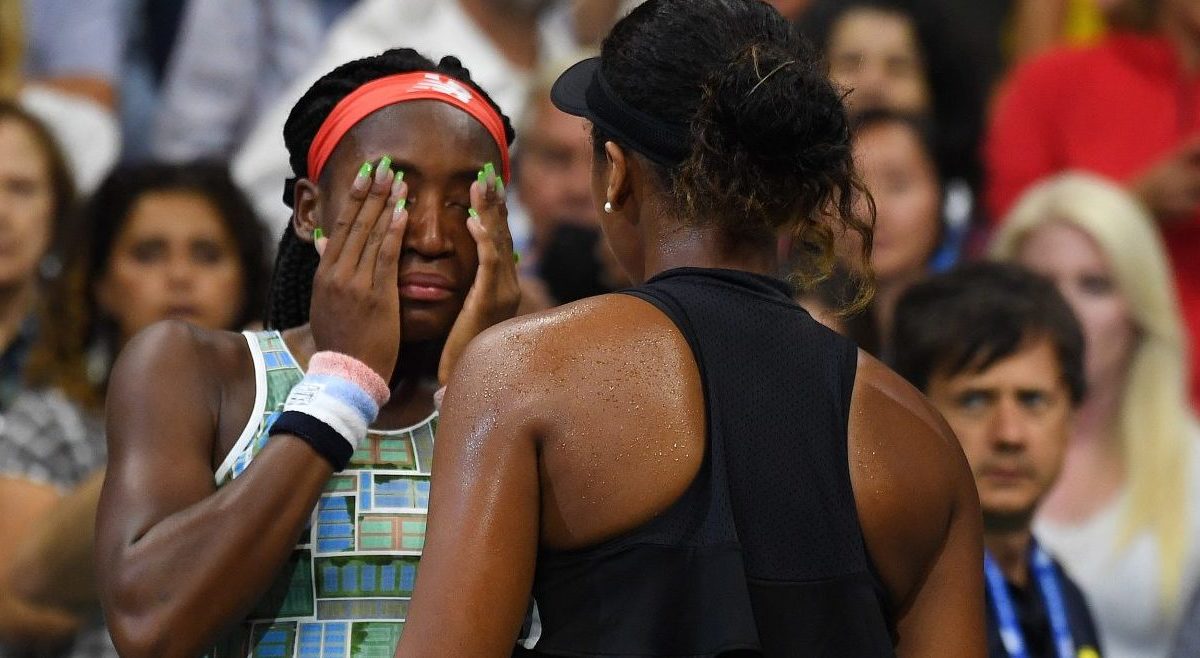 Naomi Osaka ignored 48 hours of all-American hype as she schooled teenager Coco Gauff 6-3, 6-0 on Saturday to reach the fourth round of the US Open.

An unorthodox on-court interview with both winner and loser brought both protagonists to tears.

Gauff has been flavour of the summer for US officials as the two-decade long Williams era comes to an end. Gauff beat Venus Williams in the Wimbledon first round and was suddenly cast into the role of US tennis saviour.

Despite having used up her allotment of WTA -level entries as an under-16 competitor, Gauff was still awarded a wild card into the major, with the WTA deferring from making any protest.

Osaka, who a year ago was just another painfully shy talent with one title to her name, has since collected Grand Slam titles in New York and Melbourne.

The Japanese world No. 1 – set to be the face of the 2020 Tokyo Olympics –  showed few nerves in the face of overwhelming  Ashe crowd support for the young local, with the top seed getting down to business and prove her status.

The power display from Osaka simply overwhelmed the Florida neophyte who wiped away her tears afterwards.

But she stuck around for the interview on the urging of Osaka.

“Naomi told me I did amazing,” the 15-year-old said as she choked back her emotions.

“I learned a lot from this match, she was so sweet to me.” After praising the parent of Gauff, Osaka could barely find words to describe her evening.

“This is the most focused I’ve been since Australia. It was a super-fun match. the energy was crazy – even if most of it wasn’t really for me.

“I knew she was an incredible mover, so I had to get going off the bat.”

Osaka moves into a match with Swiss Belinda Bencic, who advanced in a walkover when intended opponent Anett Kontaveit had to quit before the match with a viral illness. Bencic has defeated Osaka twice this year, at Indian Wells and Madrid.

Breakthrough Canadian Bianca Andreescu, the 15th seed, dismantled the game of former No. 1 Caroline Wozniacki 6-4, 6-4 to reach the second week of a major for the first time.

Andreescu, 19, champion last March on hardcourt at Indian Wells, has managed to bury a shoulder injury which kept her off court for weeks after Roland Garros.

She returned a month ago in Toronto and won that event at home.

Andreescu now stands an incredible 8-0 against Top 10 opponents, winning off of those matches during this season.

She beat former Australian Open winner Wozniacki in January at Auckland on the way to the finale.

“I felt really good. I started off the match pretty well, and then the second set, as well,” the winner said.

“I was up 3-Love but then as expected she found a way and she changed a couple of things. I felt like I relaxed a little bit.

“But then I put things together, and then I managed to pull through in the end.”

“My two wins (titles), Indian Wells and Rogers Cup, are obviously is giving me a lot of confidence. But this is a Grand Slam, there’s more at stake.

“I try not to focus on that. When I step on court I’m really good at blocking my surroundings, and I’m just in the zone from A to Z.”

Wozniacki swallowed the loss which left her without a second-week showing at any of the four majors in 2019.

“Obviously it wasn’t the best year for me, but really, there’s nothing you can do when your body sometimes doesn’t cooperate,” the 19th-ranked Dane said.

“At this point you just have to stay positive, and I’m going to go into Asia feeling like I can play some good tennis.”

2017 French Open winner Jelena Ostapenko of Latvia swore in Russian and somehow  got reported by a jobsworth linesman, as she lost to American wild card Kristie Ahn 6-3, 7-5.

Another American, Taylor Townsend, whose funding was scaled back by then-USTA development boss Patrick McEnroe in an effort to force her to lose weight in 2012, continued her run from qualifying rounds as she put out Sorana Cristea 7-5, 6-2.