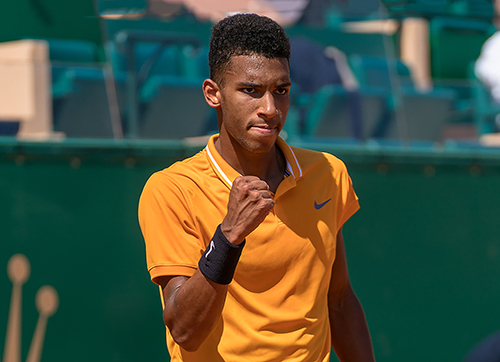 Canadian Felix Auger-Aliassime will hope to finally win a title after reaching the eighth final of his career on Saturday through a 6-4, 7-5 defeat of Sam Querrey at the ATP Stuttgart grass tournament,

The 21-year-old ranked 21st lost his trophy chance at the last edition played at the Weissenhof club (2019) going down in straight sets to Italy’s Matteo Berrettini.

FAA will take on 2014 US Open champion Marin Cilic, who came good this week after losing to Roger Federer in the French Open second round.

The Croat advanced to his first final since Queen’s club, 2018, in London as Stuttgart opponent Jurij Rodionov of Austria had to retire injured trailing 6-3, 1-0.

Auger-Aliassime spent just over an hour and a quarter in dismissing American Querrey in a first-time meeting,

“When I got into a rally, I was often able to close the point on a positive note,” the winner said,

“Points are short on grass, so you have to concentrate.

“Cilic has been one of the best players on the tour for years and a great champion. It’s going to be a tough match,” he said of the Sunday final.

Rodionov was carrying a right hip injury from his quarter-final win over Australian Alex De Minaur and was unable to keep up with Cilic in their semi.

“Yuri fell pretty hard yesterday, something like that can happen quickly on grass,” the Croat said.

‘I’ve been very focused in the past few months and have trained well. Even if that hasn’t been reflected in the results, I’ve always stuck with it and noticed that I was making progress.”

As is traditional at the Mercedes event, the winner will receive a bonus to the prize money: a Mercedes-EQS, first fully electric luxury sedan from the Stuttgart-based car giant.