Can Serena do it again? 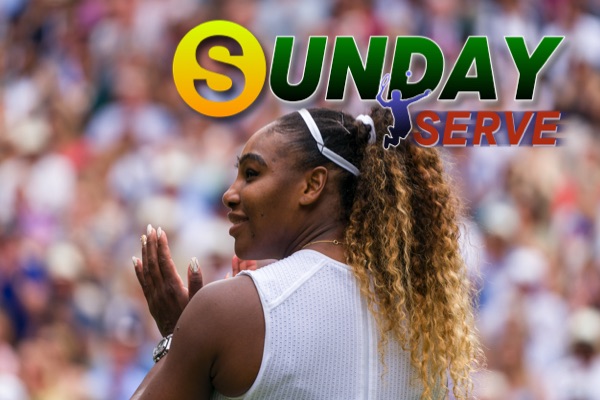 SHE hasn’t played in a competitive match since being injured at Wimbledon last year.

But the 40-year-old Serena Williams will continue her quest to match Margaret Court’s Grand Slam record at Wimbledon next week.

And after a year-long layoff, the betting still gives her decent odds, at sixth favourite to win the grass court title.

Williams last won it in 2016, reached the final in 2019, but hasn’t played any competitive tennis since losing at SW19 a year ago.

The All England Club announced that Williams had received a wild card for the singles main draw of the event.

A marketing coup for Wimbledon organisers say some, especially in light of the ban on Russian and Belorusian players.

But can she keep pace with some of the younger stars now starting to dominate the WTA rankings?

To be honest: No.

Current world No.1 Iga Świątek is not the ‘very best’ on grass – although she did win the junior championship four years ago.

But with new grass court coach Tomasz Wiktorowski guiding her, preparations could not be better.

Emma Raducanu, who was beaten by Swiatek in the junior championships in 2018, and with her injury plagued career now in question, really has more chance than Serena, say some.

Maybe it’s the drive to equal Margaret Court’s record or the inability to know when to retire (as often is the case with many athletes), we don’t know.

She can still be a dangerous opponent, but at her age recovery is what could bring her down.

We wish her well but fear this may end in further injury and tears.

“As we increasingly talk about Iga, who’s absolutely dominating, would it be Serena who can knock herself off that perch? That would be an amazing storyline. Imagine that: Iga versus Serena first round?”

A MARKETING magazine summed it up perfectly last week when its headline ran: Proof there’s more cash in flogging brands than there is in winning tennis tournaments comes from Emma Raducanu’s latest work for Nike.

The 19-year-old is back in a fly-on-the-wall, heart-on-the-sleeve mini doco for the sportswear giant, called What Are You Working On?

The doco sees Raducanu talk about her past, her home town of Bromley in London’s south-east and her love of motocross.

Most recently, Raducanu has struck a deal with bankers HSBC to educate young people in finance – whilst financing her own future.

HSBC is the official banking partner of Wimbledon.

JUDY Murray, mum of Andy and Jamie, was critical of the off-court drive to brand the Raducanu name this week, writing in a column in the London Telegraph that sponsorship pressures can damage any on-court gains.

“Raducanu’s team will be mindful of all the savvy sponsorship deals and marketing campaigns she has astutely tapped into over the past eight months,” Murray wrote.

“They will no doubt bring her huge financial rewards, but at what cost to her body?

“I say this because as with most young players, it shouldn’t be a case of patching them up and preparing them for the next high-profile event just because a sponsor or a federation wants to ensure their branding is visible.

“I’ve seen it before – a sponsor might have a campaign to activate at the next slam, so they put pressure on the agent, who puts pressure on the coach, who in turn pressurises the fitness trainer to make sure the player is ready.

“But is that keeping the athlete’s best interests at heart?. When athletes are so young, you can’t expect them to make those big decisions.

“They can get sucked into the short-term picture and of course, it can be tempting to play in all these lucrative events.

“What’s more, they have to verbalise everything to a very much older team who are actually reliant on them for their salaries. That’s a really tough situation to be in.”

EVER heard of Ryan Peniston?

No, nor had we until last week when his name popped up as a winner at Queens.

Peniston was just not a winner, he was a winner.

Ranked 180th in the world, he had beaten Casper Ruud, a layer who sits 175 places above him on the rankings.

But an amazing back story then unfolded as we learned that young Ryan was diagnosed with rhabdomyosarcoma at age one.

That’s a soft tissue cancer found in children. He had surgery to remove a tumour before he underwent an extensive period of chemotherapy in London.

“It is a difficult period to look at. I don’t remember anything when I was younger and even when I was a kid I didn’t know that much about the situation,” he said this week.

“It is only in the past 10 years that I have become more interested and asked my parents to tell me.”

Cancer surgery as an infant can be debilitating in later life. But this story has a happy ending.

At 13, he moved to Nice, France to train at ISP Academy before going to college in the States at 18.

A graduate of the University of Memphis tennis program, he was part of the GB University Team that won the nation’s first ever team gold medal at Master’U Championships.

He has long been cancer free but donated his first tennis pay cheque to the cancer hospital that saved his life.

“It’s not a goodbye, but a see you soon,” Puig wrote in her retirement message on Instagram.

“Over the past 28 years of my life, tennis has been my constant. It has given me some of the most thrilling and memorable experiences I could have ever asked for.

“But, sometimes, good things come to an end. Today, I announce my retirement from tennis. After a tough three-year fight with injuries and 4 surgeries, my body had enough.

A DAY after being awarded an Officer of the Order of Australia in the Queen’s Birthday Honours, former world No. 1 Ash Barty took part in The Big Freeze, where celebrities tumble down a water slide in costume, plunging into an ice-cold pool to raise awareness and funds to fight Motor Neurone Disease.

Barty was dressed as Rafiki from The Lion King and she hoisted a stuffed Simba into the air as she landed in the chilly water ahead of an Aussie rules game on TV.

“They’re from different backgrounds, their stories are each unique, and each has served in different ways. … This diversity is a strength and each has impacted their community and made it better.”

And finally … let this sink in:

Emma Raducanu looks set to return to Wimbledon with just 33 minutes of match practice under her belt because injury is expected to rule her out of Eastbourne next week.