Nadal needed three match points over two games in what had been an unexpected fifth set against the Russian who has broken through on hardcourts  this summer. 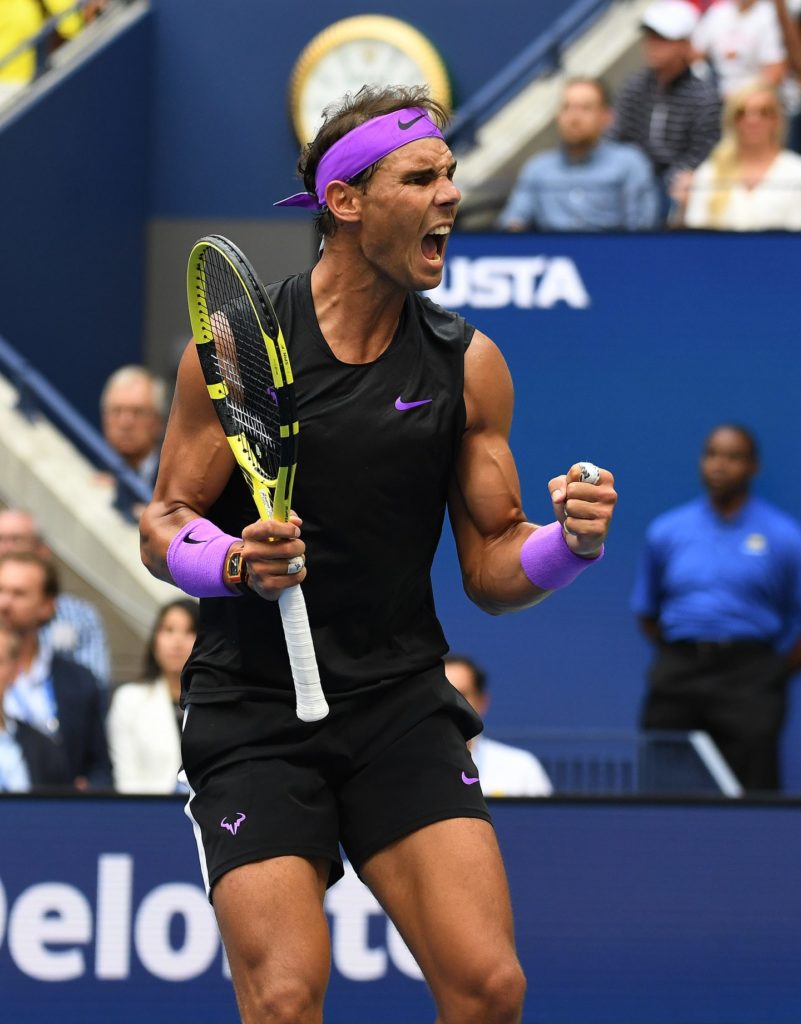 Nadal, who shed tears as a laudatory post-final film of his 19 Grand Slam titles was shown on the big screen, won his 19th Grand Slam singles title, pulling him to within one of all-time leader Roger Federer.
The struggle lasted for four hours, 51 minutes, with the tardy Nadal several times penalised a serve by chair umpire Alli Nili for exceeding the time allowed to start the next point. 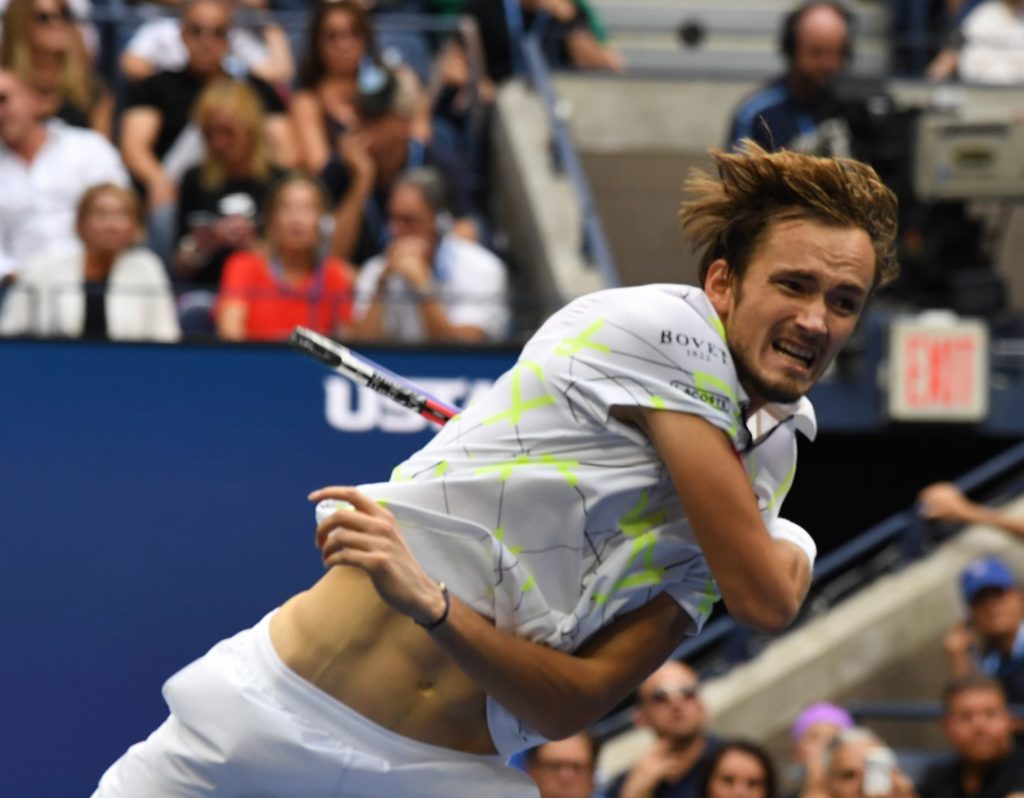 The Spaniard made a habit of either holding up his opponent’s serve or taking more than the maximum 25 seconds allowed on his own service games.
Medvedev,  by contrast, never asked for the towel and was consistently  ready to play at good 20 seconds while Nadal dithered through his range of preparatory checks.
Nadal becomes the first man to win five Grand Slam titles after turning 30. He was presented the trophy by Rod Laver. 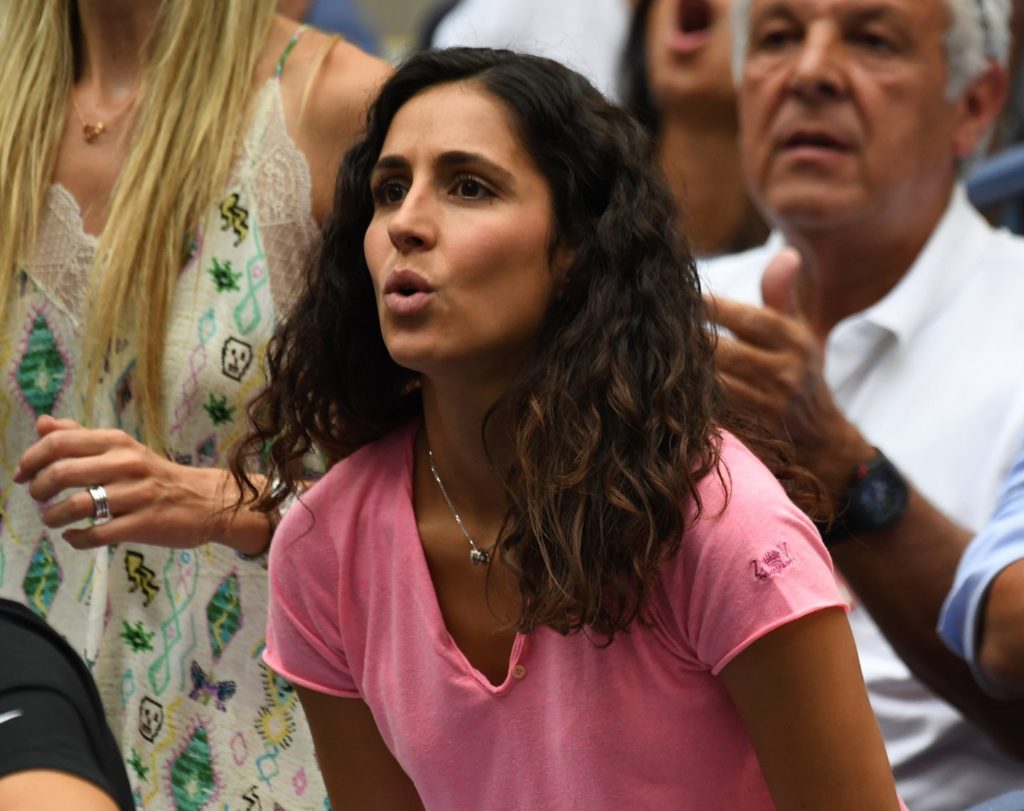 “This was amazing final, which I had more or less under control in the third set,” Nadal said. “But everyone saw why Daniil is now No. 4 in the world.
“He was able to fight and change the rhythm of the match, incredible. Well done to you and your team,’ the Spaniard said in the trophy ceremony.
Nadal called the final “one of the most emotional nights of my career, the crowd has been amazing”.

“It was incredible to play in this stadium, it’s the most energetic in the world.”

“This win means so much to me, especially since the match became so tough, but I was able to hold my nerves. It was a crazy match, I hope to see you next year.”
The 33-year-old Nadal looked like wrapping up a straightforward success as he led two sets and a break over his fifth-ranked opponent. 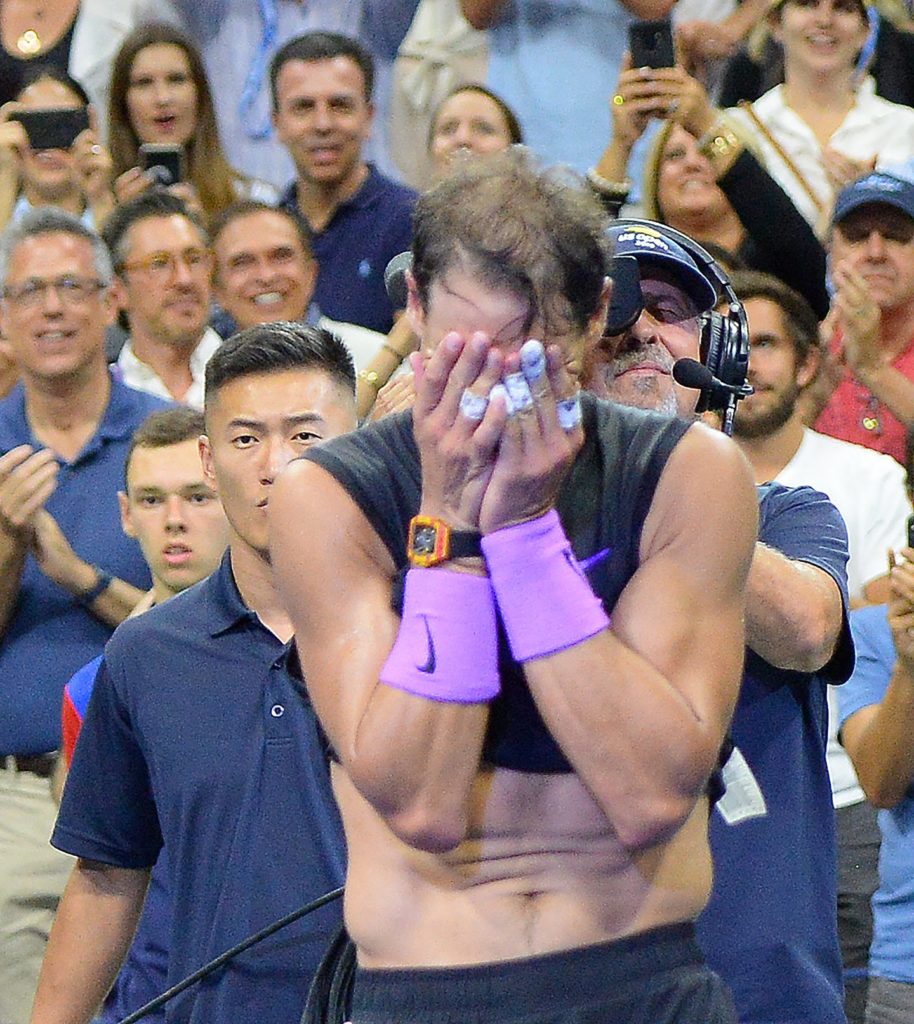 But Medvedev had other ideas and the subject of jeers midway through the fortnight from fans who answered back with subtle sarcasm and a smile on his face at the time, bought the fickle New York public over to his side with his fightback in the final.
The Russian was playing his fourth final in as many tournaments and won the Cincinnati Masters in preparation for the Open.
“I want to congratulate Rafa for his 19th Grand Slam title,” Medvedev said. 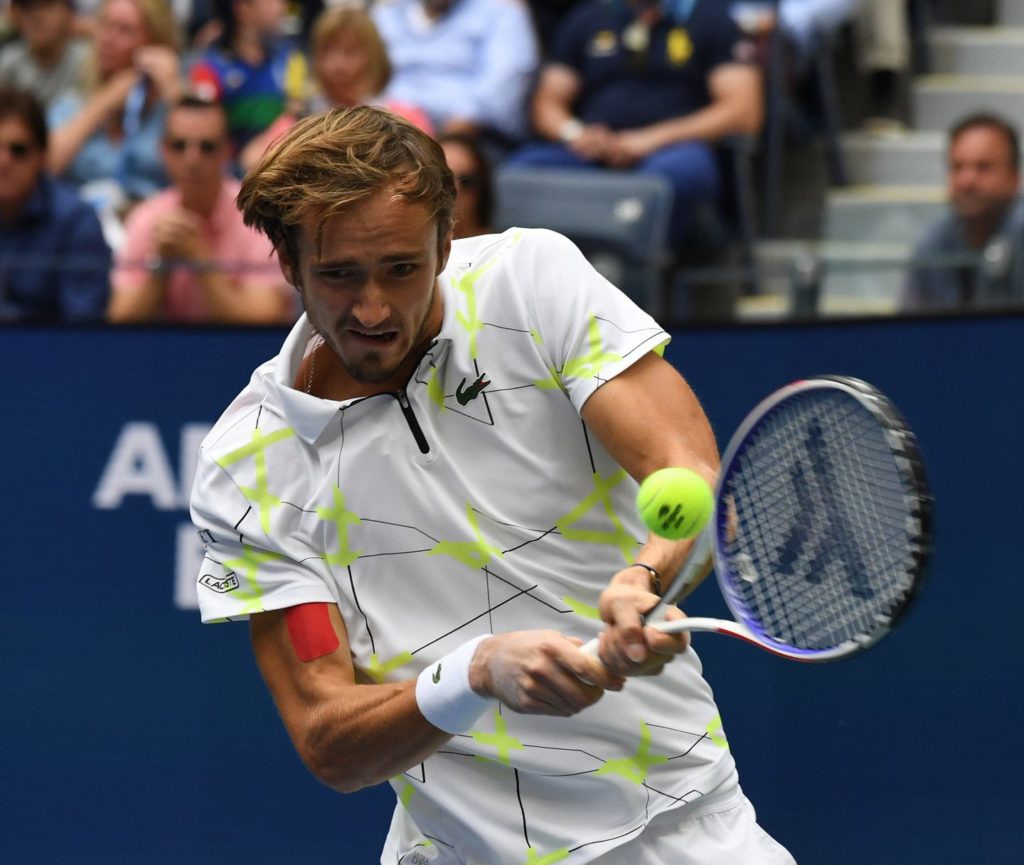 “What you have done for tennis in general is amazing, there are hundreds of millions of kids playing our sport after watching you play.”
Medvedev began his comeback when all appeared lost in the third set after dropping the first two.
The 23-year-old Russian, with wife Daria never changing her stoic expression in the player box, shifted the tension into top gear as he broke Nadal for 7-5 to win the third set and stay alive. 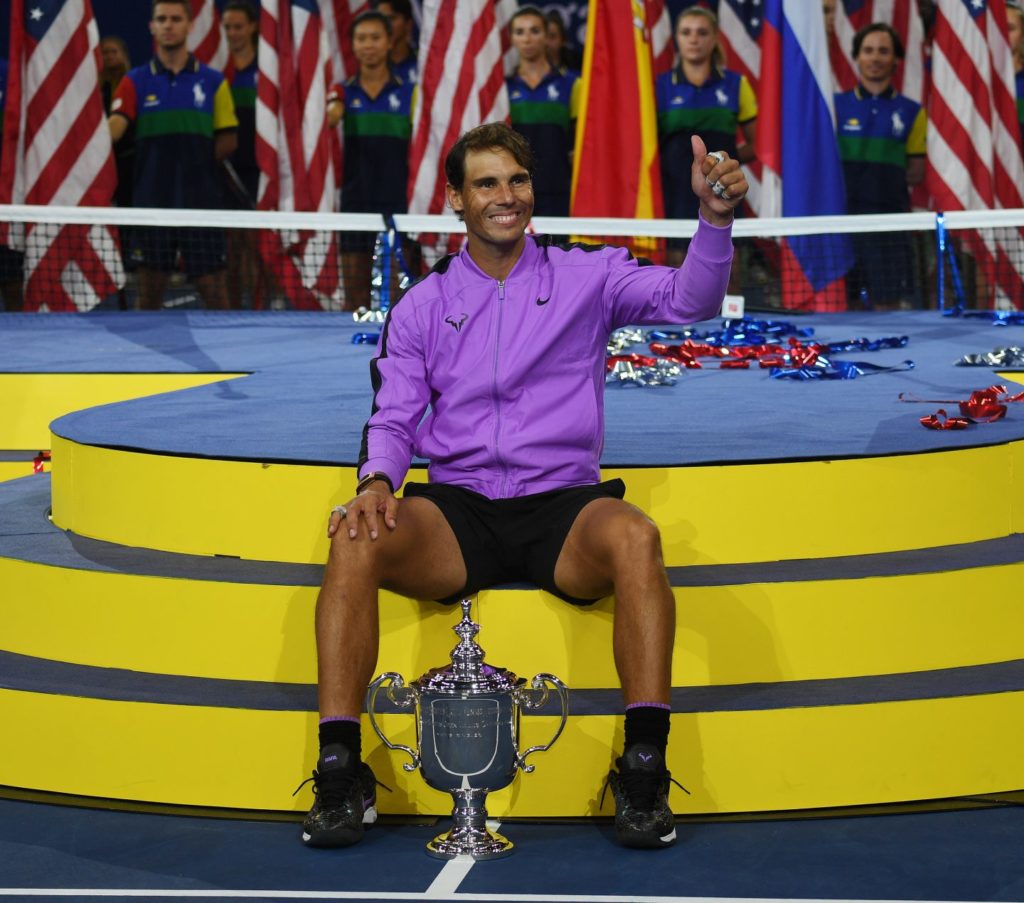 With his physical resources still appearing fresh, Medvedev began to dictate in the fourth set; a Nadal shanked return and a subsequent backhand pass from the Russian on set point means it was game-on for a deciding fifth set.
Second seed Nadal had to save three break points to hold for 1-1,and broke Medvedev for 3-2 after the Russian had led 40-0.
Nadal made it a double break for 5-2 before Medvedev reacted to break back on a double-fault from his opponent. 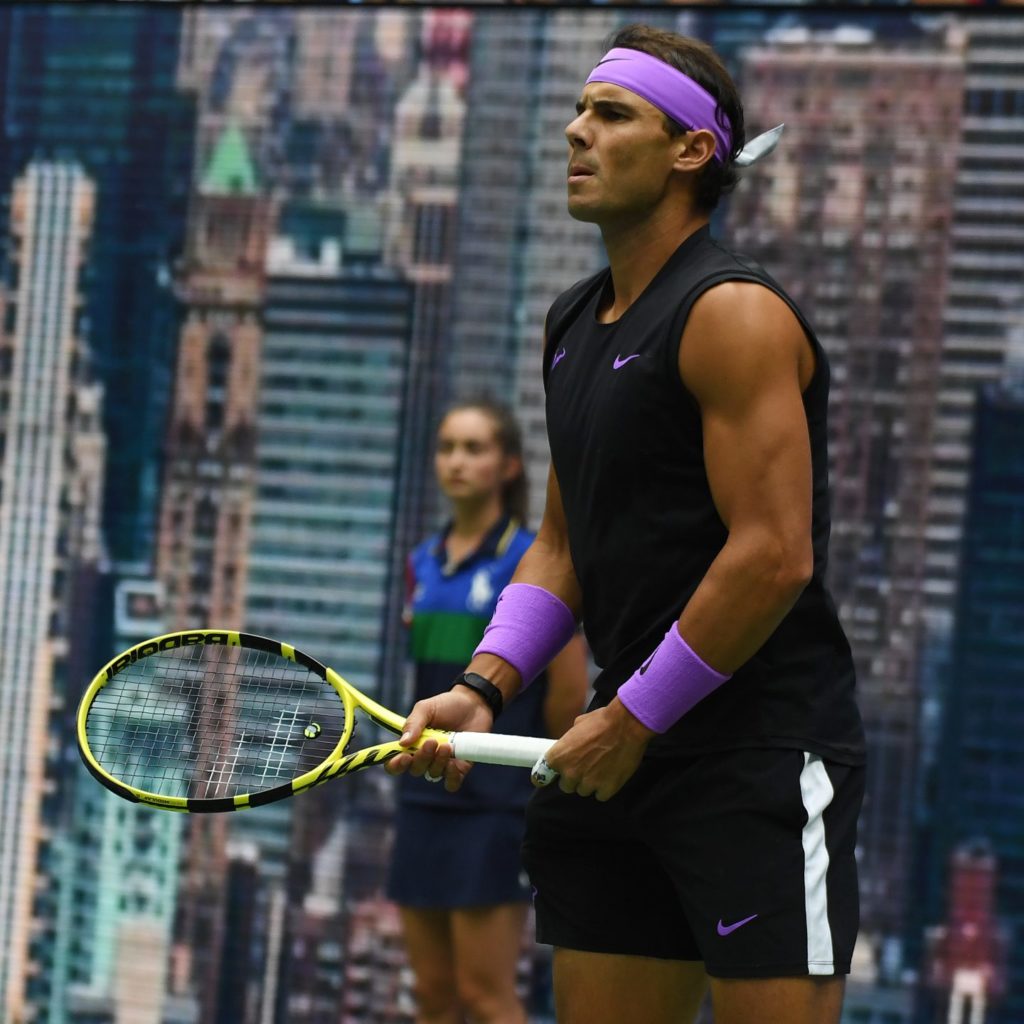 Medvedev saved two match points to hold for 4-5 before Nadal was finally able to serve it out on his third chance on a return long from the Russian.
“In the third set, i was wondering what I would say in my loser’s speech,” Medvedev admitted. “So I said I have to fight and see how it goes.

“It went far – but unfortunately not my way.” 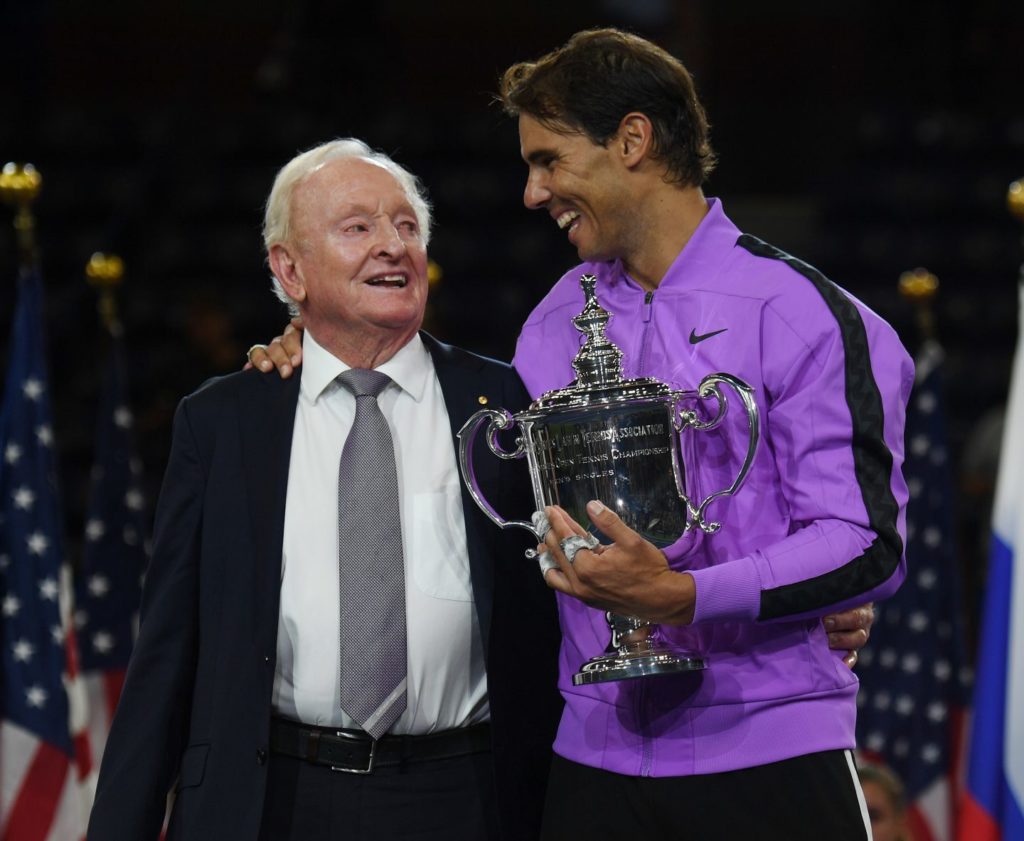 “The fans were pushing me because they wanted to prolong the match and see more tennis.
“Because of that I was fighting like hell.It was electric in here. I can change, I’m a human being; a lot has changed for me this year – including reaching this final
“Thanks to the fans who supported me this week and gave me such amazing energy.”
Nadal now stands 209-1 in the best-of-five matches after winning first two sets, suffering his only loss here four years ago to Fabio Fognini. 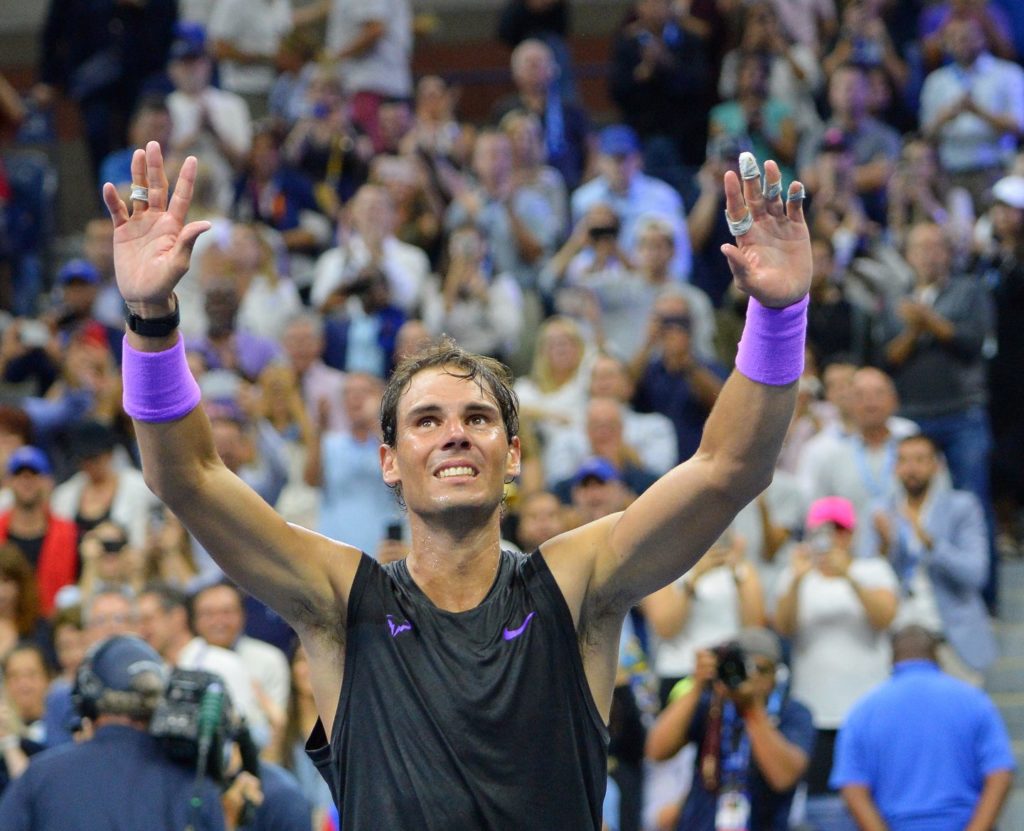 Nadal was playing his 27th Grand Slam final and beat Medvedev a month ago for the Montreal title with the loss of just three games.
The Russian had won his last 12 matches while Nadal won his 11th in a row as he played his fifth New York final; he has now defeated his last 20 Russian opponents.
https://youtu.be/dUsXlTqJsEU
Post Views: 253
Tweet
Pin
Share46
46 Shares