It’s finally here … Wimbledon. To so many the holy grail of tennis.

The original, just don’t tell the French, or the Australians, or maybe even the Americans.

Different courts, different surfaces. but grass must be the traditional home of the game.

At least that is what the All England Lawn Tennis Association will tell you.

New seeds, new faces, a new look to some areas – but Wimbledon, with its shiny new retracting roofs to keep out the British ‘summer’, with its strawberries and cream and with its time-served traditions really is the creme de las creme of grand slam tennis.

And this year there is plenty to keep up on the edge of our seat: on court, around court and off it.

The Women’s championship has so many ‘new’ names as the game transitions from one era to another.

Ash Barty, the first Australian No.1 seed in 46 years. Naomi Osaka and others will be out to unseat her as the Williams’ eras comes to an end.

The Men’s still has its top 3 – or 4 – but there is a cluster of up and coming new names that will dominate in years to come.
So Sunday Serve this weekend unashamedly is Wimbledon, some facts and figures, some names, old and new and a look at who, in 2 weeks time, might be crowned 2019 champions. 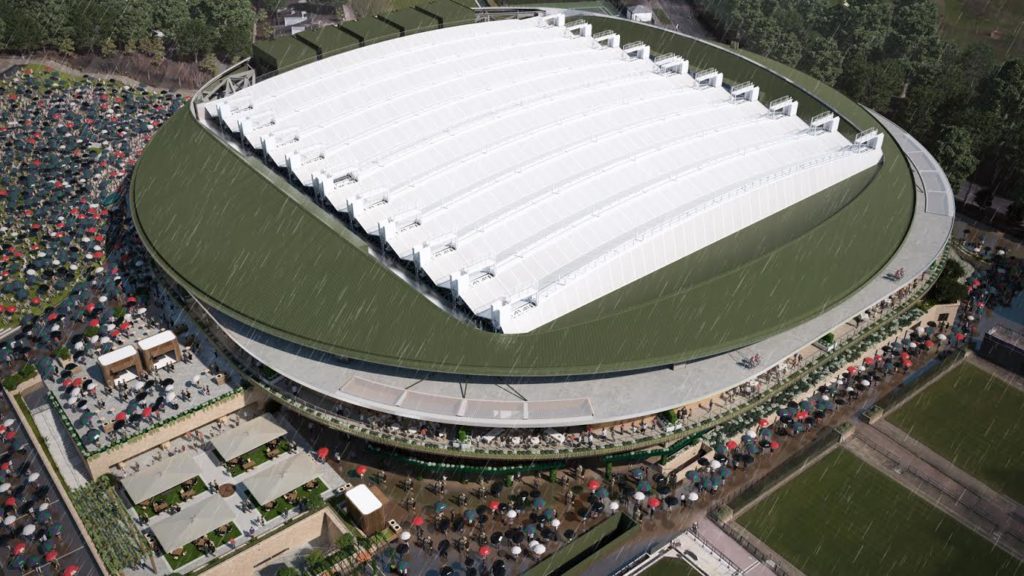 Facts and Figures on frequently asked topics about The Championships.

1. Wimbledon is the world’s oldest tennis tournament, established at the All England Croquet and Lawn Tennis Club (now often referred to as AELTC) in 1877.

2. Its name comes from its location – Wimbledon, a district of southwest London. Originally it was based off Worple Road, but it moved to its current location Church Road in 1922.

3. The most recent British players to win the singles events were Andy Murray 2013 (Men’s Singles) and Virginia Wade in 1977 (Women’s Singles).

5. The courts are sown with 100% perennial ryegrass and Wimbledon is the only Grand Slam event in the world played on grass.

6. Sponsored advertising is not allowed at Wimbledon.

7. Centre Court is now fitted with a retractable roof to help avoid rain delays that have been an infamous feature of the tournament throughout its history.

8. Centre Court is only used for the Wimbledon Championships but it saw extra play in 2012 when the All England Club hosted the tennis events in the London 2012 Olympics.

9. The tradition of players bowing or curtseying in front of The Royal Box ended in 2003; however an exception is made if Her Majesty Queen Elizabeth II or the Prince of Wales is present.

10. BBGs (or Ball Boys and Girls) are drawn from schools in local London boroughs. Candidates are nominated by their headteachers and must pass a written test and a fitness test among others. The average age of a BBG is 15. Ball Girls did not appear on Centre Court until 1985. Around 250 from around 1,000 entries come through a rigorous training routine.

11. Champions receive a 3/4-size replica of their trophy.

12. Tickets are secured mostly through ballot; however you may queue for tickets on match days as well. 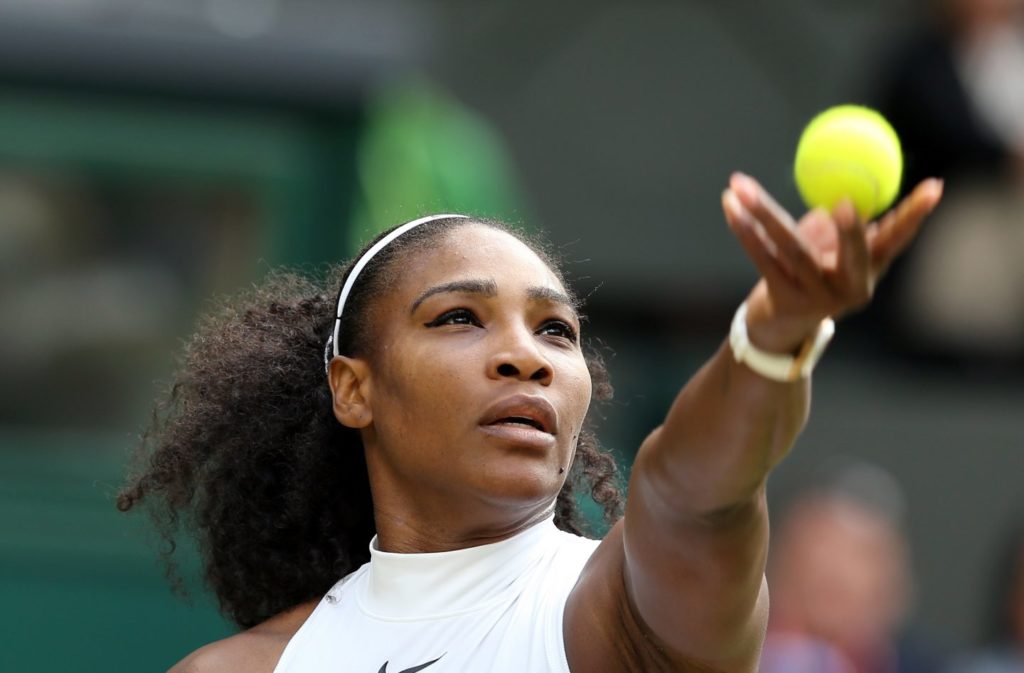 Balls: Part of the longest partnership in sporting goods history, Slazenger has been the Official Supplier of tennis balls to The Championships since 1902.

Yellow balls used for first time in 1986. 53,000 used during The Championships’ period. Stored at 68 deg F. New balls after first seven games (to allow for warm-up), then after every nine games. Subject to availability used balls are sold daily. £2.50 per can of three. Proceeds go to the Wimbledon Foundation. At start of day 48 tins are taken onto Centre and No.1 Courts and 24 on all outside courts.

Capacity: 39,000 spectators in the grounds at any one time. Re-selling of used/unwanted tickets for charity creates turnover so the cumulative daily figure can be higher.

Clothing: The “predominately in white” rule was introduced in 1963 before the “almost entirely in white rule” was brought in in 1995. Accessories were included in the rule from 2014. Competitors must be dressed in suitable tennis attire that is almost entirely white and this applies from the point at which the player enters the court surround.

One for the future: Cori Gauff will be the first 15-year-old to compete in the main draw at Wimbledon since Britain’s Laura Robson in 2009 after defeating 19th seed Greet Minnen of Belgium 6-1, 6-1.
“I can do anything I put my mind to,” Gauff, ranked 301, said. 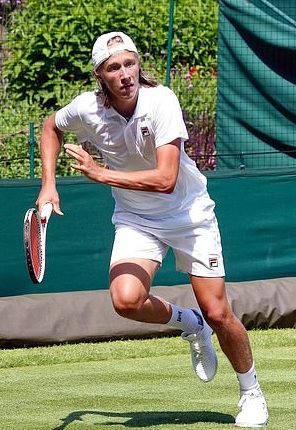 Like father, like son: This is not Bjorn Borg dashing across the tennis court, but his son Leo in action in London last week.

The 15-year-old is already hoping to follow in the footsteps of his father and was competing in the Aspall Tennis Classic at the Hurlingham Club in Fulham.

Leo, whose mother is Borg’s third wife Patricia, has a long way to go to match the Swede’s achievements though. He is currently 352nd in the boys’ world rankings.

LOVE him or loath him, he is the hottest ticket at Wimbledon this week.

Yes, it seems everyone wants to see Nick Kyrgios blow up!

At Queens last week he accused a line judge of “rigging the game” and when warned by the umpire, told him “your hat looks ridiculous”. He also berated himself out loud courtside for preparing for his match by playing computer games until 3am.

“After the top few guys I’m guessing the fourth or fifth most desirable guy to watch is him,” McEnroe said of the 43rd-ranked Australian.

Unseeded at Wimbledon, Kyrgios will be the classic “dangerous floater” none of the big guns want to meet early and he could make a great Centre Court attraction.Not an empty seat to be seen. 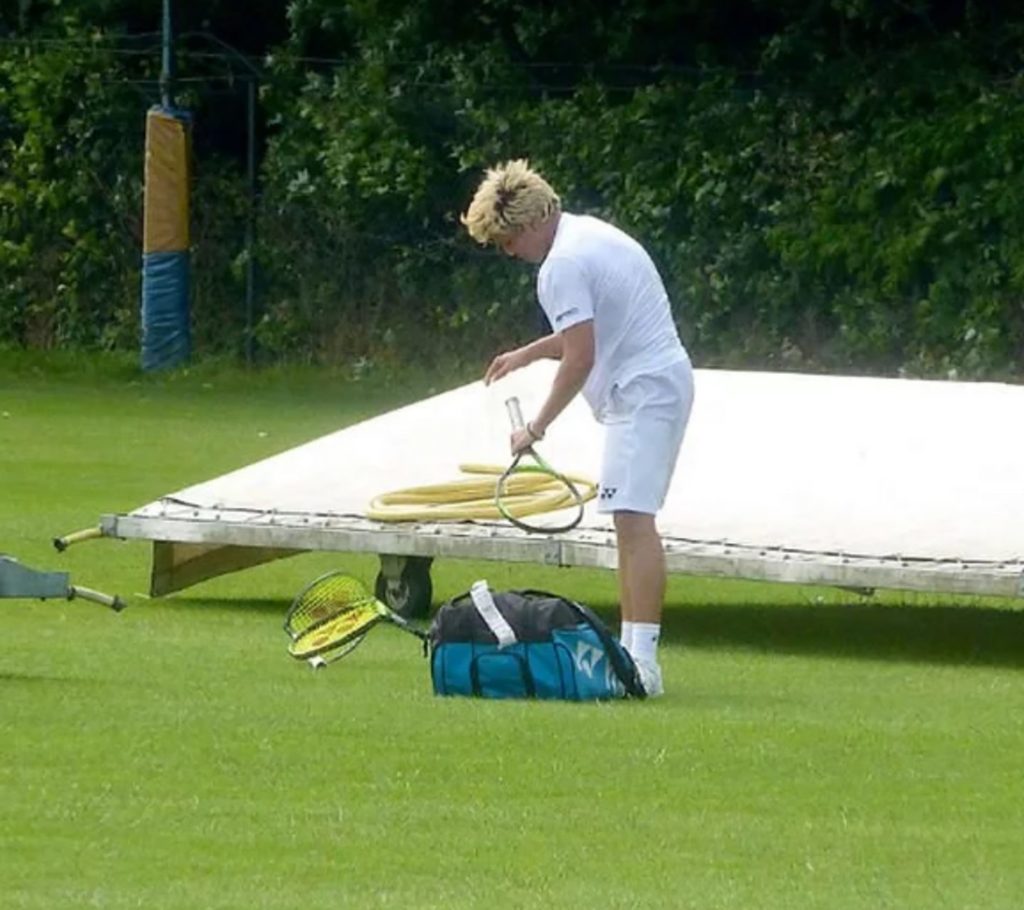 AS if one Nick Kyrgios is enough, another Australian this week decided to blow a fuse and let go with a furious expletive or two after losing a match.
Wimbledon qualifier Akira Santillan engaged in a furious outburst after his 6-7(5), 6-3, 12-10 defeat to Ruben Bemelmans at Roehampton.
A gruelling fifth set, which lasted for 22 games, proved to be too much for Santillan, as he stormed off to a private area to let off steam, as our picture shows. 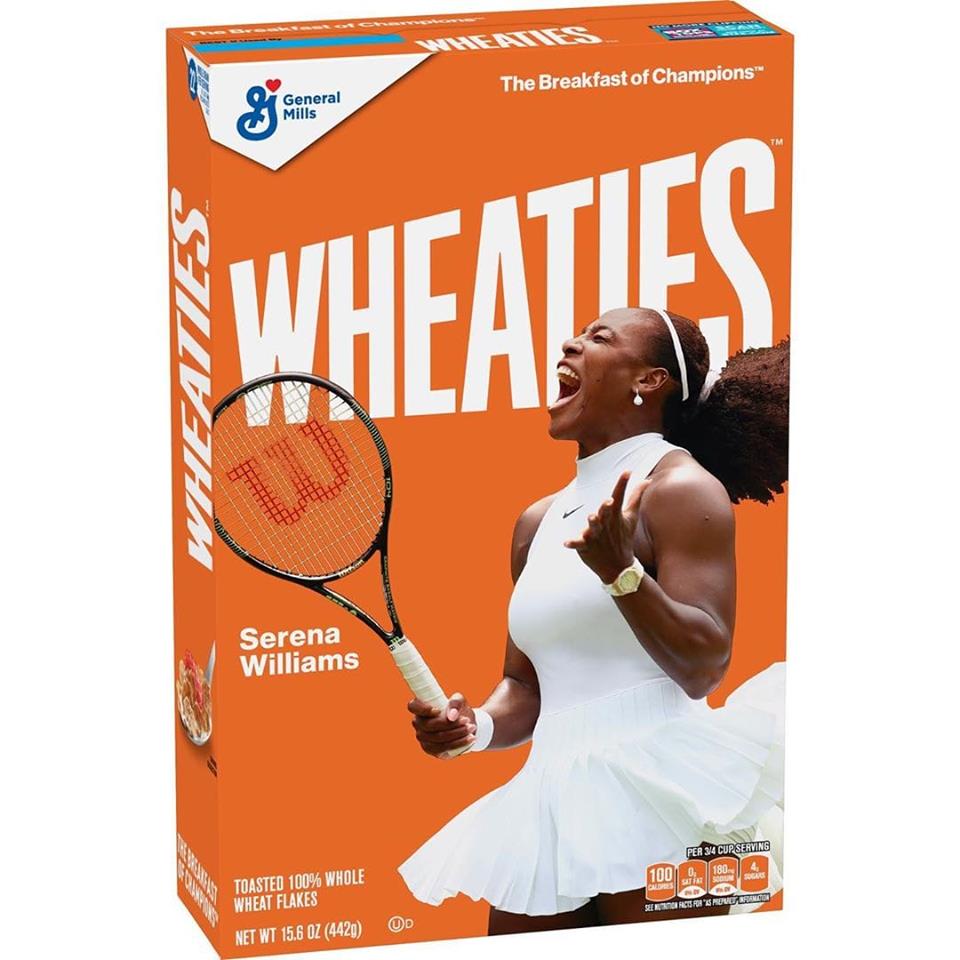 WHEATIES announced last week that former World No.1 Serena Williams was to be the next athlete to adorn the cover of Wheaties iconic orange box. “Serena exemplifies all of the personal attributes that Wheaties looks for when choosing who its next champion will be,” said Tiffani Daniels, marketing manager for Wheaties.
Speaking about this association, Williams added, “I am so excited to be on the cover of the next Wheaties box. I have dreamt of this since I was a young woman and it’s an honour to join the ranks of some of America’s most decorated athletes. 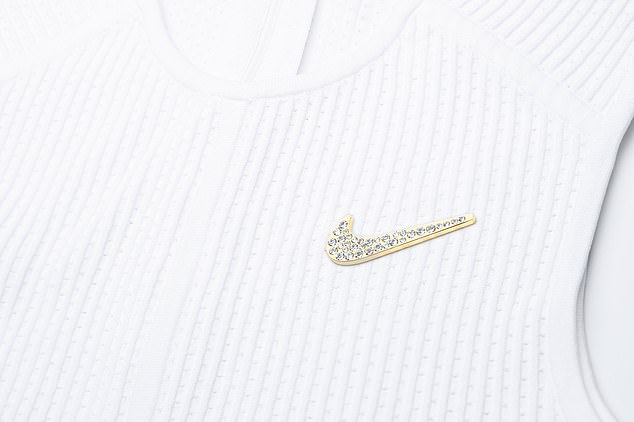 WITH Wimbledon kicking off tomorrow, Nike has revealed a sneak peek of Serena Williams‘ outfit featuring a sparkly brooch created in collaboration with Swarovski. The tennis star will be wearing a sweater-knit, textured white dress along with a Swoosh brooch adorned with 34 crystals, symbolizing the age at which Williams won her most recent London Grand Slam in 2016. 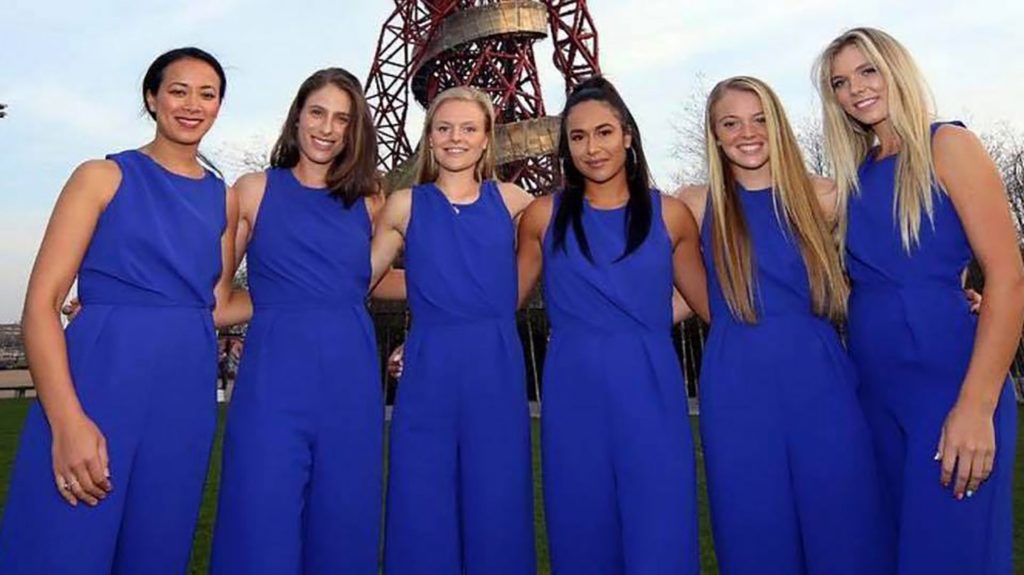 THE Fed Cup is to follow the Davis Cup with a new tournament format next year.

The women’s event will be a six-day final tournament in April with 12 teams playing for an US$18 million prize on claycourts in Budapes, the International Tennis Federation.

The ITF has already switched the Davis Cup to a similar pattern, with the first 18-team final event to be played in November in Madrid.

“We have consulted and listened to stakeholders and worked with the WTA and its Player Council to make sure the new format represents the interests of the players,” ITF president David Haggerty said.

The changes to the Fed Cup ease the strain on the tennis calendar by going from three weeks to two, with qualifying matches in February.

The current system has a final series in November, seven months after the semifinals.
Only 10 of the 12 teams at the final tournament will have qualified on merit.

One team will be offered a wildcard and Hungary, which hasn’t played top-tier Fed Cup tennis since 2002, is guaranteed a spot as host.

The first two teams guaranteed to qualify are Australia and France, which will play in this year’s Fed Cup final in Perth, Australia, in November. 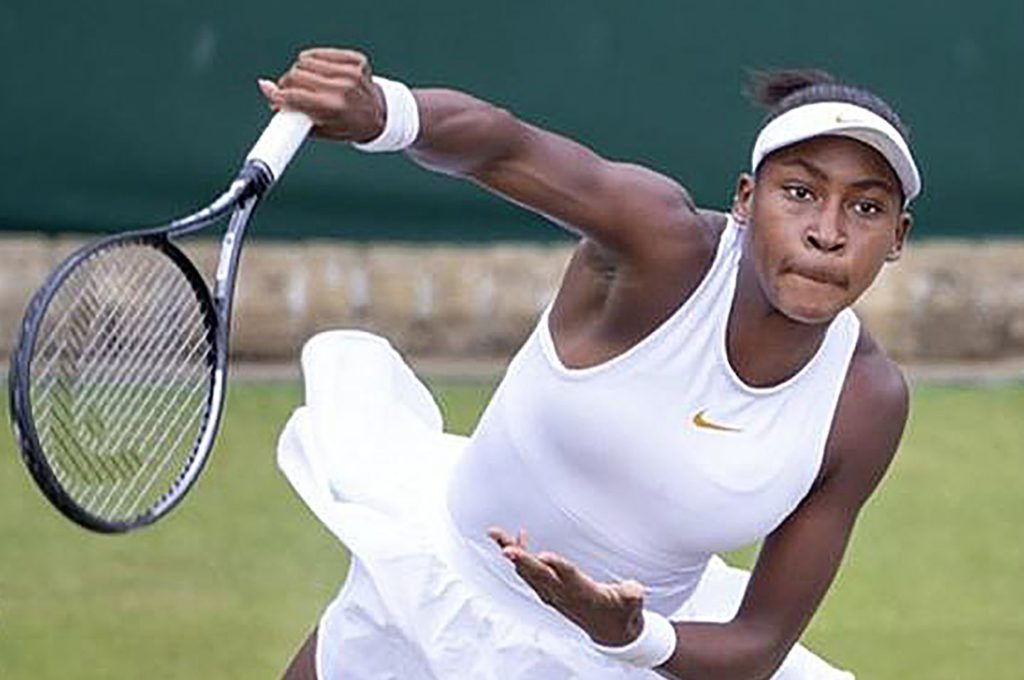 AND  finally … American Cori Gauff made history on Thursday when she became the youngest player to qualify for Wimbledon.

Gauff will also be the first 15-year-old to compete in the main draw since Britain’s Laura Robson in 2009 after defeating 19th seed Greet Minnen of Belgium 6-1, 6-1.

“I can do anything I put my mind to,” Gauff, who was playing in qualifying on a wild card, said.

In an ever-changing sporting world, tennis is battling to keep pace with other sports in the fight to maintain - …

According to Mark Milne, Thirty30 is the future of tennis. An abbreviated form of the game where, says Milne, 'every …

FORMER British No.1 Annabel Croft nailed the ongoing debate over on-court coaching this week when she wrote a column in …