Two of the most overused ways to eulogise a famed sportsman or woman are to anoint them as a legend or a great. Maria Sharapova, probably wasn’t either in comparison to some of her more successful peers. However, there can be no debate that when it came to being universally recognised for her glamorous image and star quality, in her pomp the 32 year-old had no equal.

The Russian born player only won five Grand Slam singles titles which is undeniably no mean feat but still minimal compared to the achievements of Margaret Court (24 titles), Serena Williams (23), Steffi Graf (22), Martina Navratilova and Chrissie Evert (18 apiece).  Nevertheless, her skill with the racket and her photogenic beauty, allied to supreme marketability, enabled her to accumulate a fortune believed to be worth in excess of $US195m (£151m), figures that none of those other female luminaries can rival. 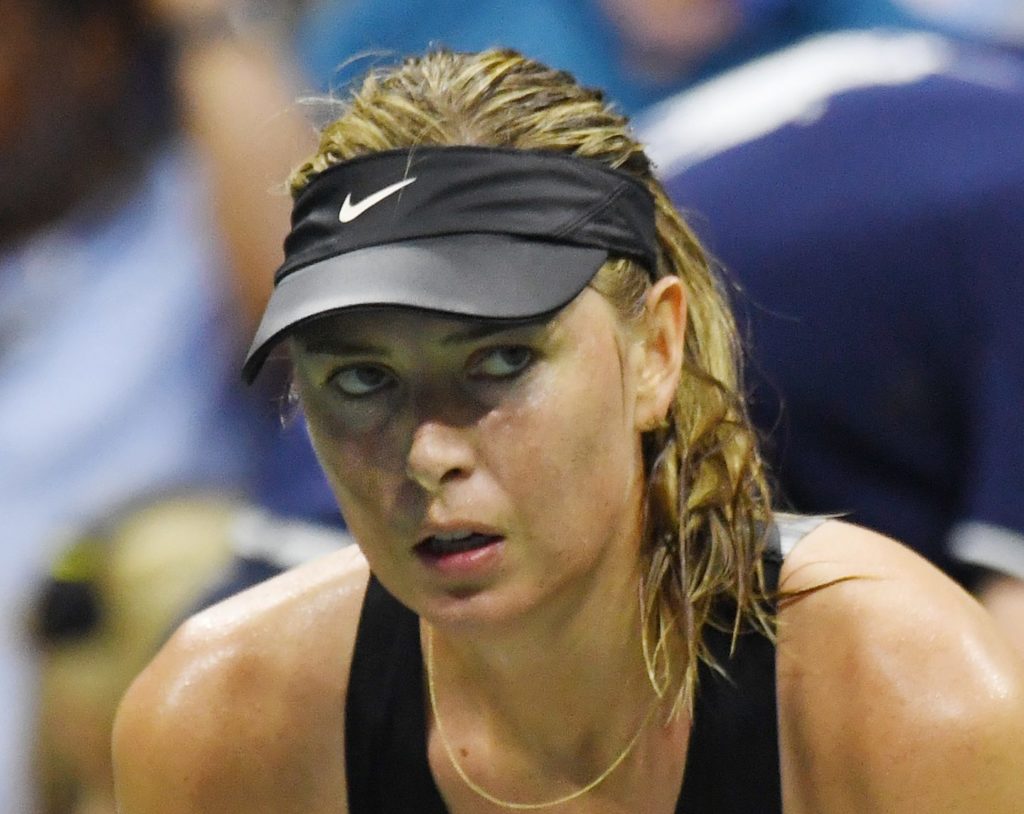 A despondent Maria Sharapova looks towards her box as she lose in straight sets to Carla Suarez Navarro in 2018. Photo Roger Parker International Sports Fotos Ltd

Yet for all her wealth, Sharapova now finds herself in the position of standing down from her sport in the knowledge that her place in tennis history is forever tarnished. Not because of the unfriendly manner in which she treated every one of her opponents throughout a career that totalled 645 victories compared to 171 defeats and saw her collect 36 titles on the WTA circuit. Or ear-splitting noise she made with every stroke that most certainly was not a grunt but more a scream or banshee-like wail.

There will always be giant black question marks over the Sharapova achievements after she was proven a drugs cheat, testing positive and subsequently admitting the use of the newly banned substance Meldonium on reaching the quarter finals of the Australian Open four years ago. After serving a 15 months long ban from the sport, and presumably competing clean thereafter, there can be no debate she was never the same player again.

*Check out our photo gallery video tribute to Maria Sharapova, below

After her return to women’s tennis in April 2017, she never reclaimed a place in the world’s top 100 and retired from the sport this week with an inglorious ranking of world no. 373. Admittedly chronic injury problems have limited her opportunities in tournaments for the last couple of years but she has only won 13 of her 36 matches since returning to competition in Stuttgart on April 26, 2017. And in 2020 she had played only two matches and lost both, winning just a solitary set.

In her retirement announcement, bestowed exclusively to the high-class fashion magazine Vanity Fair, Sharapova revealed it was the 6-1, 6-1 thrashing to her career -long nemesis Serena Williams at the 2019 US Open was provided the ‘final signal’ it was time to retire. 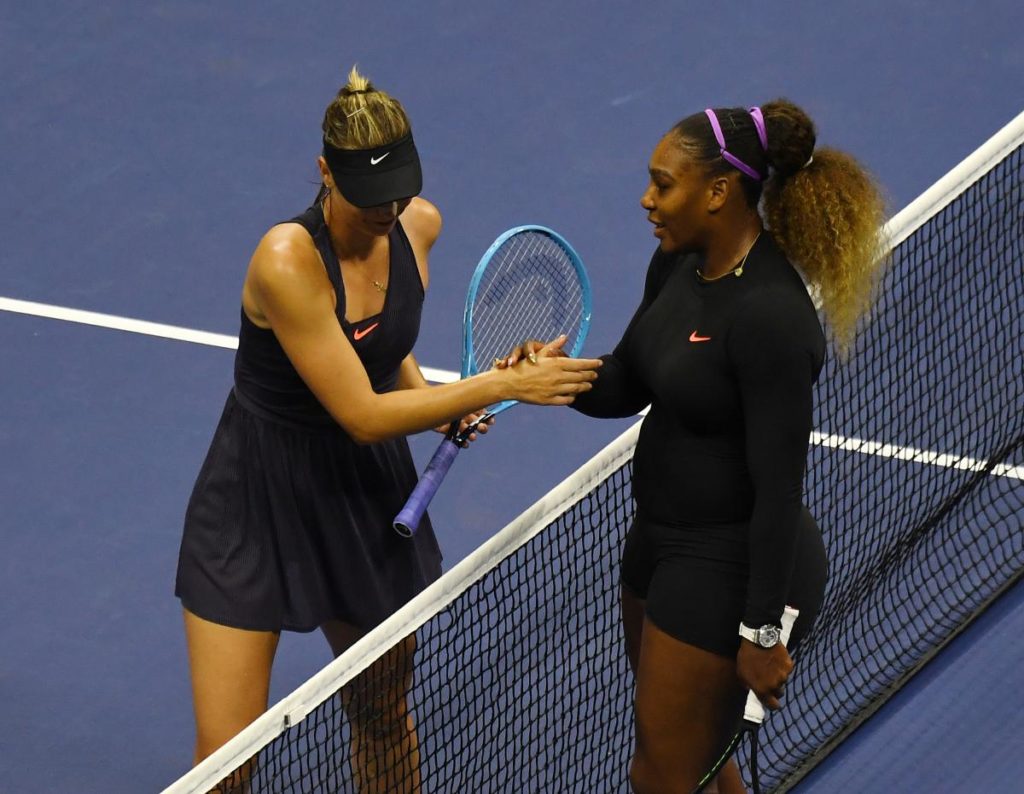 For those who chose to remember younger Sharapova, who scored that memorable win over Williams in the 2004 Wimbledon final as a 17-year-old, she was a stunning player, complete with gloriously aesthetic serve, a well-constructed double-fisted backhand and a telling forehand, when it worked. However, she considered her forehand enough of a liability in her youth that she considered hitting it with her left hand instead of her right, a habit she continued occasionally late in her career. But she rarely ventured towards the net and she was never considered a fleet-footed athlete.

Coaches like Robert Lansdorp and Nick Bollettieri schooled her into becoming a champion but the ruthless single mindedness and powers of perseverance were driven into her by her father Yuri who took her from the family home in Siberia to the United States with less than $1,000 in his wallet, were major reasons for her success. Lansdorp maintained a young Maria simply had no fear, Bollettieri insisted: “It was all business with Maria. She knew what she wanted and how to get there.” 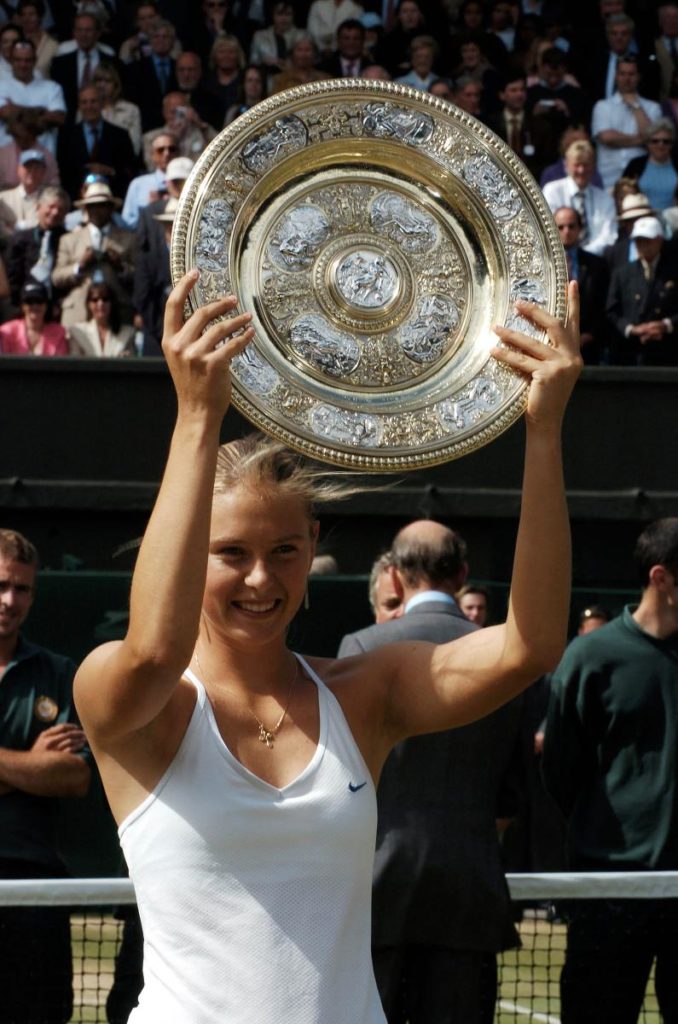 And there was never anytime for fraternising with the opposition. The younger of the Williams sisters was regarded as the major enemy, a mutual dislike that intensified by Sharapova engaging in a romance with male player Grigor Dimitrov at the time the Bulgarian was dating Serena. Yet writing in her autobiography, ‘Unstoppable: My Life So Far’, Sharapova maintained: “I think Serena hated me for being the skinny kid who beat her, against all odds, at Wimbledon.

Later Sharapova admonished Dimitrov for daring to simply chat with another rival Caroline Wozniacki when their paths crossed in the lobby of a Moscow hotel. And everyone else on the women’s tour were subjected to the same hostility; handshakes at the net after the majority of Sharapova’s matches were frosty, unsociable gestures with little or no eye contact. 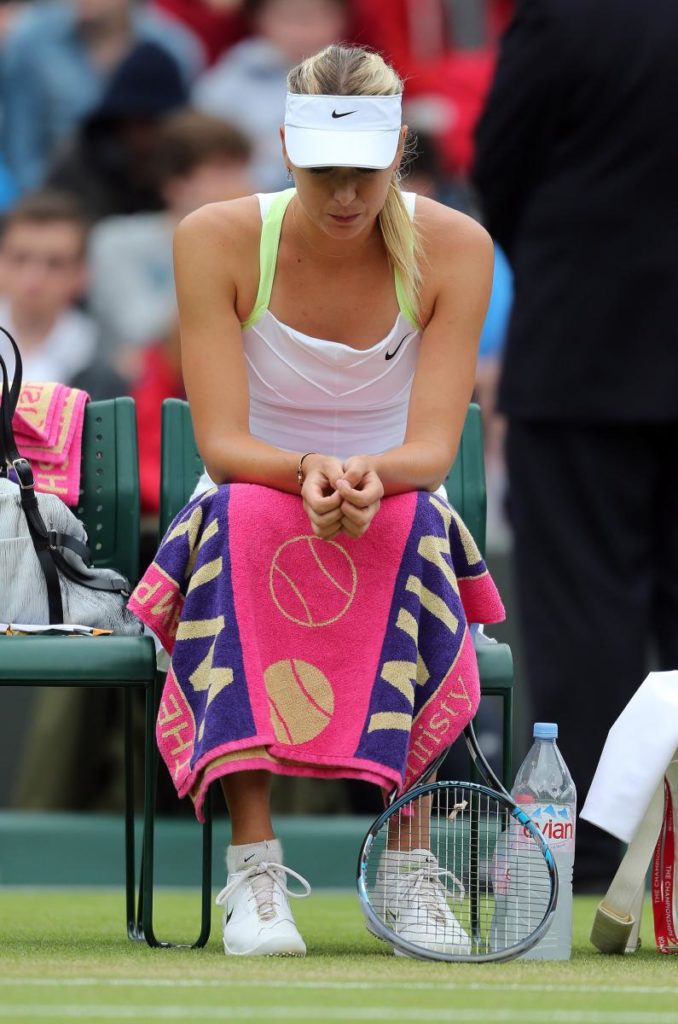 Yet this week Sharapova’s current boyfriend Alexander Gilkes paid tribute to the bravery she demonstrated in making the decision to retire. On his Instagram page, Gilkes wrote:  ‘To the kindest and most professional person I know, here is to you Maria, and all that awaits you in your next chapter! May you continue to inspire us all with your deep humility, self-depreciation, strength and focus.”

Retirement means Sharapova can partially escape the physical agony that her plagued her for so many years. She underwent one shoulder surgery a decade or more ago and probably requires another to alleviate tendon damage. She has suffered  inflammation in her forearms that at times has made it excruciatingly difficult for her to even grip a racket. 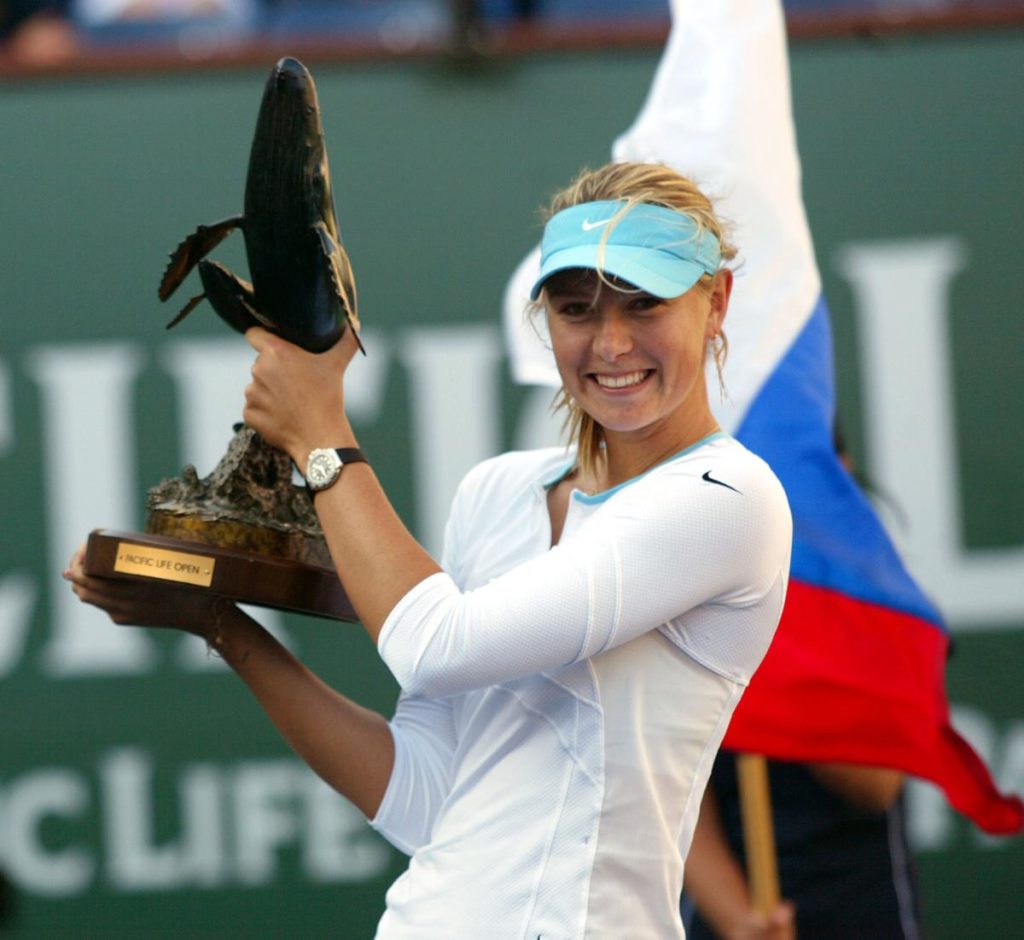 Maria Sharapova wins the Ladies Final at  Indian Wells in 2006.

This week Sharapova admitted: “I look at photos of myself and of the motion where I’m just about to hit the ball, and I’m in the air or just as I’m making contact and I can’t even look at it because it makes me cringe. I have so much pain.”

Through it all Maria Sharapova was one of tennis’ truly committed fighters. Of all her accomplishments, probably the two that surprised her most was twice winning the French Open on the clay of Roland Garros. She likened her initial experiences on the crushed brick of Europe to ‘ a cow on ice’. 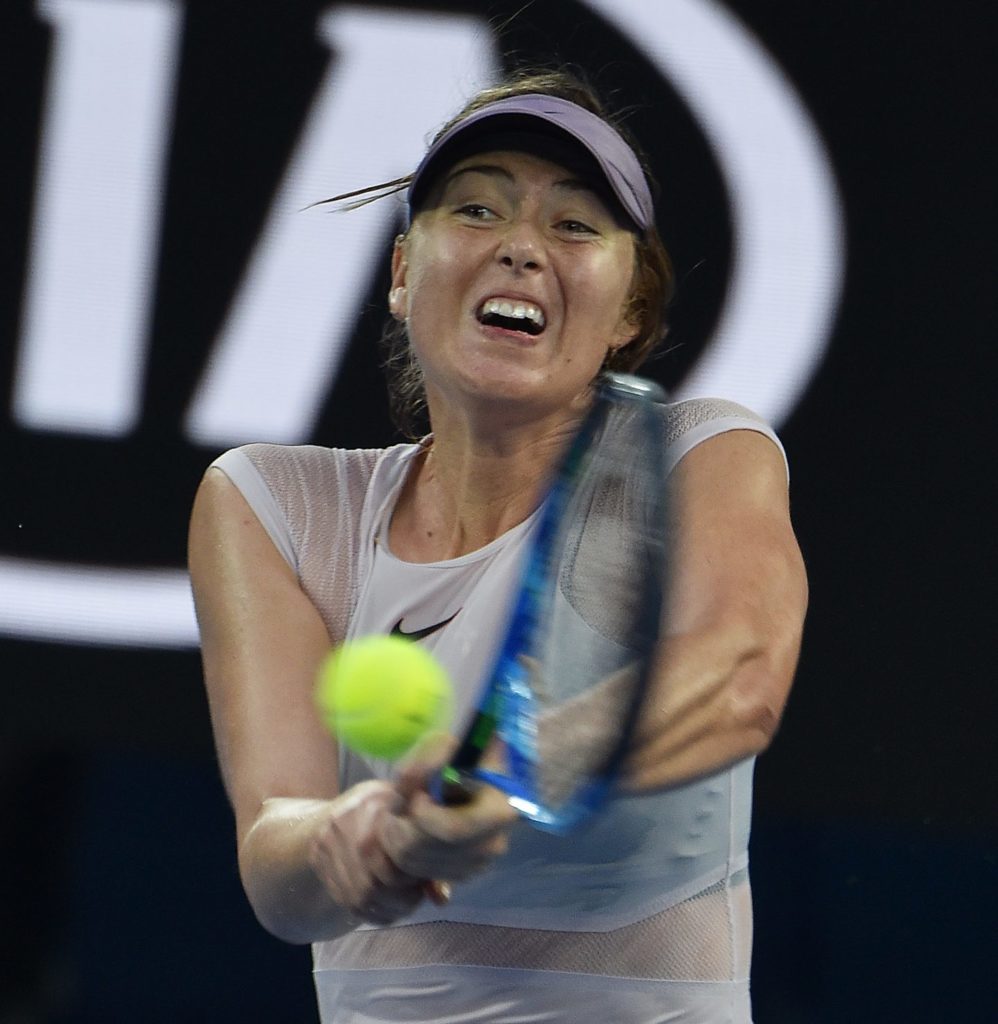 Barry Flatman has been one of the world's leading tennis correspondents for more than 25 years. The main body of his work appeared in the Daily Express and the Sunday Times in the United Kingdom but his byline also appeared in The Times and the Daily Mail. He was the inaugural president of the International Tennis Writers Association and served two terms as chairman of Britain's Lawn Tennis Writers Association. He broadcasts regularly on the BBC and talkSport Radio and ghost wrote Pat Cash's best selling autobiography Uncovered.

Sofia Kenin? To many casual tennis fans, the name is a new one. Who? Where from? How did she get …

Dominic Thiem unleashed a quarter-final upset of an irritated and tetchy Rafael Nadal, with the Austrian fifth seed blowing past …