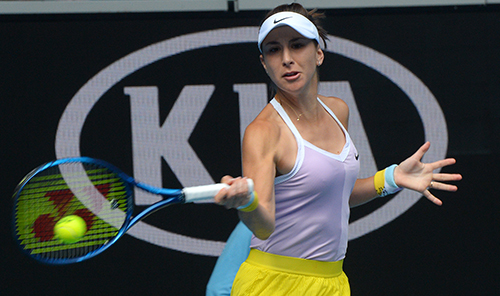 Swiss player Belinda Bencic hopes organisers will make the situation fairer for those players confined to their rooms for 14 days.

Bencic told reporters in Melbourne she had fears players could get injured if they have to compete immediately following the hard quarantine.

Bencic is one of the 72 players not allowed to leave their rooms after passengers on three charter flights tested positive.

Players who travelled on flights that did not return positive cases are able to spend five hours a day practising.

Players are scheduled to play in events from January 31 before the February 8 start of the first grand slam of the year.

“The priority is to not get injured as that is, I feel, the biggest risk,” she said.

“Being in the room for 14 days and then playing a tournament the next day or we have two days in between, it’s just really a big risk.

“The tennis level will not be there, but we can just try and do our best.”

The Swiss player, who is sharing her room with her boyfriend, said she spends most of her time sleeping and cannot wait to breathe fresh air and be out in the sun when her isolation ends.

“We tried to move the bed and the furniture into the bathroom or into the hallway and then I tried to hold the racket, play tennis, kind of simulate so my muscles don’t forget and they are still active,” she said.

Australian Open boss Craig Tiley said the main priority was to make it as equal as possible for all the players.

But Bencic said the situation was “far from equal”.

“Many players have a much bigger advantage. It’s not like there’s only one or two players in quarantine but there’s 72,” she said.

“I think they are doing the best they can to make it (if) not completely equal and fair options … the closest that it can be.”