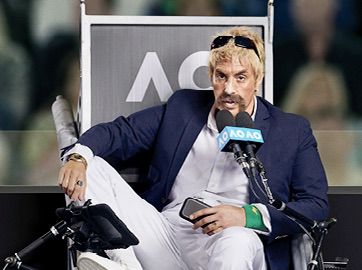 Cohen, famous for his role as Borat, plays an umpire at Melbourne Park who constantly sabotages games in order to maintain love on the scoreboard during matches featuring Barty and Kyrgios.

The promotion centres around an Uber Eats instagram code to unlock free menu items when the score is at love.

“This is my second year collaborating with Uber Eats and when I saw the scripts and the cheeky comments from Sacha Baron Cohen’s Rogue Umpire I knew it would be a laugh,” Barty said.

“I hope people have as much fun watching it as I had making it.”

David Grifiths, head of marketing at Uber Eats said Having the world No.1 in the campaign was huge.

“Ash brings a great warmth to the campaign alongside our cheeky Rogue Umpire and did a great job helping us explain the campaign mechanic – when the score is at love, you could eat for love,” he said.

“Given Ash only dropped ten points her entire first match there was plenty of love on the scoreboard, and understandably she’s getting a lot of love from fans on our channels who’ve been the recipients of thousands of free meals as a result of her on court dominance.”