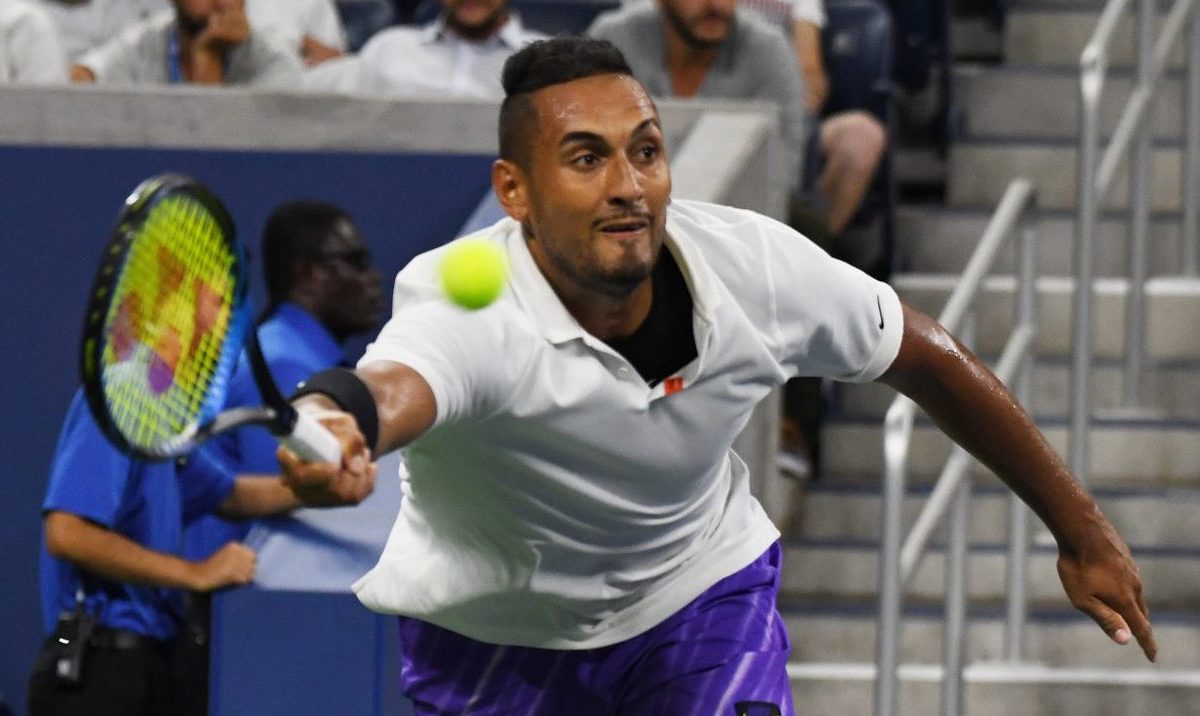 Nick Kyrgios will be walking on thin ice when the controversial Australian returns to tennis after a dictat handed down today by ATP decorum officials.

The long-time bad boy of the courts has been told to clean up his act pronto or face additional sanctions and fines after being penalised a record $113,000 for various outbursts last month in Cincinnati – including an innovative double off-court racquet smash out of sight of the chair umpire.

But following an investigation, the ATP has put the 24-year-old on warning that any further infractions of any kind will results in a fresh fine of $25,000 and suspension for 16 weeks – almost an entire season of competition for most players.

Officials headed by ATP rules VP Gayle Bradshaw left Kyrgios a huge loophole –most likely in hopes that he will permanently mend his wild ways.

All sanctions will be put into a holding pattern if the payer can manage to get through a six-month probationary period without any outbursts.

The trial period kicks in upon an acceptance by Kyrgios of the agreement. In official terms, Kyrgios was found guilty of Aggravated Behaviour offences under ATP rules dating back over the past 12 months.

To successfully toe the straight and narrow Kyrgios must:have no further: Code Violations during the probationary period that result in a fine for:  Verbal or Physical Abuse of officials, spectators or any other persons while on-court or on-site, or – Unsportsmanlike Conduct based upon an act, such as spitting, directed towards an official, spectator or other person during or upon conclusion of the match, or –Visible Obscenity directed towards an official.

In addition, he must bring a mental coach onto his team during ATP events and undergo counselling in the November-December off season.

Should Kyrgios complete the bureaucratic obstacle course, he will once again be in the clear. The wild child was also probed by the ATP for statements he made in recent weeks calling the sanctioning body “corrupt.”

But officials decided that the infraction– and quick walk back by Kyrgios – was minor and no additional penalties were applied. Publication of the ruling came as Kyrgios withdrew from the autumn Asian swing, citing a collarbone injury which he said he picked up last week at the Laver Cup, with the No. 27 returning home to Canberra and ending his 2019 season early.

“There’s no point me playing if I can’t really serve, because serving is my strength, my favourite shot,” Kyrgios told AAP yesterday.

“So if I’m not able to serve at my best and I’m hindered, I’m probably not going to bother playing until I can get it right again.”

Kyrgios threw away multiple chances in the opening set to fall to a 7-6(5), 6-1 loss in 65 quick minutes as he began his Asian run of tournaments on a losing note in Zhuhai.

The Chinese city 35 kilometres west of troubled Hong Kong was the setting for another Kyrgios collapse, with the controversial player failing to follow up on his vow mad at the weekend Laver Cup in Geneva to take the Asian swing with some seriousness.

“At this at any rate I’m not even too sure what I’m going to do moving forward with the rest of my season,” he said.

“I’m going to have to talk to my team and see what’s best … at this stage it doesn’t look great.”

The No.27 went down despite earning a 5-2 margin in the opening set against veteran Italian opponent Seppi.

But even holding three sets points was not enough to get the early stages of the job done, with Kyrgios losing it in a tiebreaker.

From then on, the interest seemed to have gone out of the contest for the Australian, who made only minimal efforts on the day to the loss, his 15th of the season against 21 wins for the Acapulco and Washington champion.

Australia have been drawn in Group D, alongside Belgium and Colombia.

“I want to play (in the) Davis Cup toward the end of the year, that’s mid November,” Kyrgios added.

“So until then I’ve got a lot of time, I can rest, recover, get my shoulder right.”