Canada stormed into the semi-finals of the Davis Cup on Thursday with a last-gasp doubles win over Australia to send the 28-time champions home in Madrid with a 2-1 loss.

Vasek Posposil did all the work over three rubbers, with the pair combining in the deciding doubles to beat John Peers and Jordan Thompson 6-4, 6-4.

The Canadians broke for 5-4 in the second set after recovering an early break and closed out victory in an hour and a quarter.

Pospisil served up three timely aces in the final game and poached a volley winner at the net on match point to end the encounter. 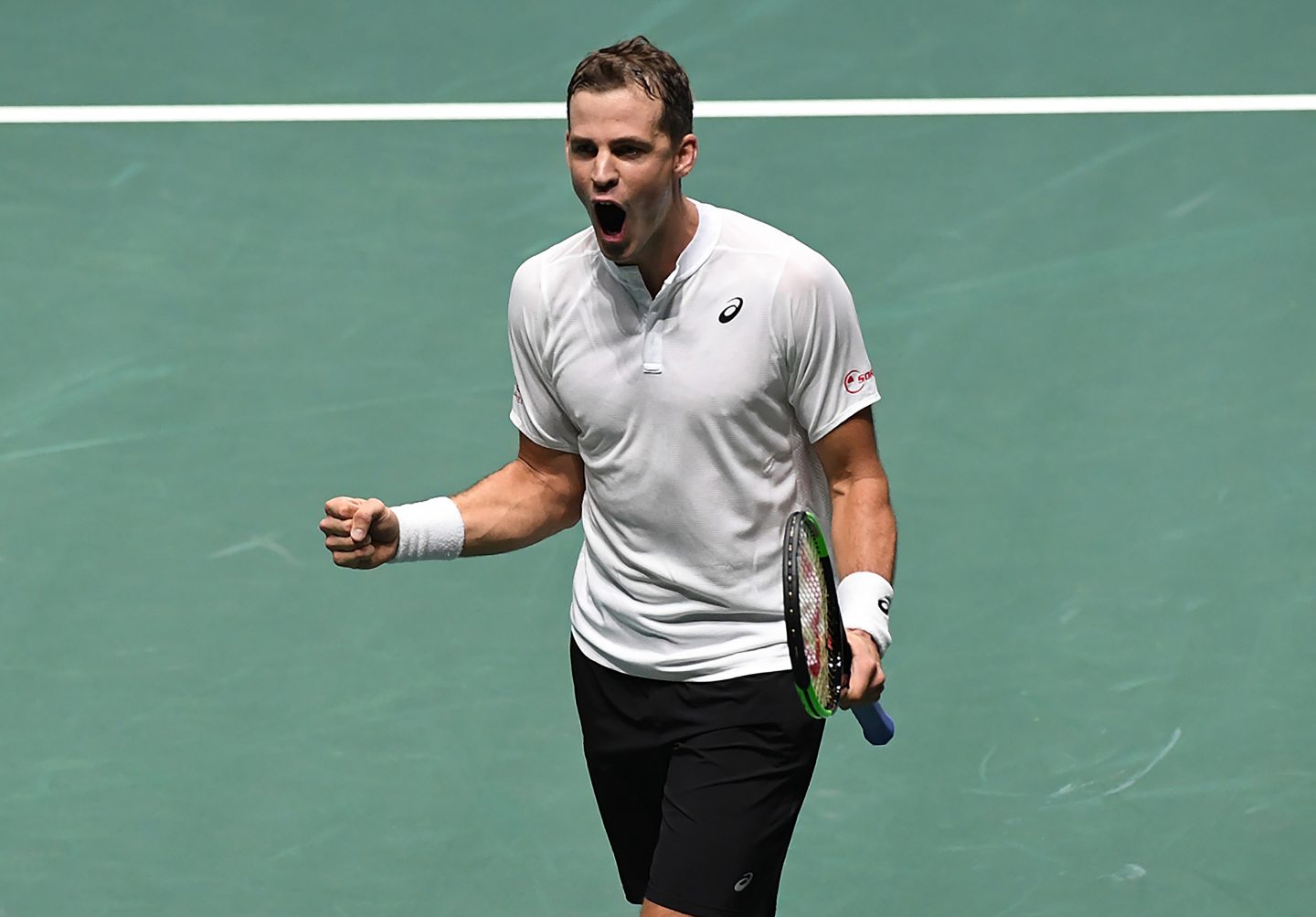 The winning side will await a semi-final opponent from Serbia or Russia, facing off on Friday.

Shapovalov got Canada away to a solid start as the first quarter-final of the oddly scheduled event was played a day before the other three are due to take place on Friday at the Spanish-run event played in a reduced format.

The left-hander from Vancouver won the opening set but was overhauled by an intense effort from De Minaur, who learned his tennis in and still lives in Spain.

With the score knotted at a set each, the third set stayed level until two double-faults from Shapovalov in the 11th game cost him a serve, with De Minaur taking the lead 6-5.

The Australian, cheered on from a bench constantly on its feet, levelled the tie at 1-1 as he claimed the victory and celebrated with a chest bump from Hewitt and loud congratulations from Nick Kyrgios.

“I never thought it would be easy,” De Minaur said. “I jut had to keep on going, waiting for any chances that came along.

“I just felt like I was playing for something bigger than myself… there was no chance I was going to show any negative emotion.

“I wasn’t just out there for me, I was playing for my teammates and my country. It was my most emotional time on court.

“I’m so glad I got through and gave us a chance to win this.”

Shapovalov had won nine of his last 10 Davis matches, standing 2-0 in Madrid

heading into the tie.

Pospisil, who beat Millman with 15 aces, is healthy again after months of back problems and January surgery, showing full form in taking the opening singles point.

“I’ve been playing really well this week and trying to keep the momentum going,” the 29-year-old said.

“I’ve been playing really well this week and trying to keep the momentum going, feeling really confident. I’m playing pretty relaxed, which is good – I’m enjoying my time on the court after being injured.

“it’s changed my perspective a bit, and maybe that’s helped me for the last couple of months. I was confident I’d get back to a high level, but it has come a little bit sooner than I’d expected.

“I’ve been pain free since I started training, which hasn’t happened in three or four years.”

Britain managed the quarter-finals the hard way, with national No. 1 Dan Evans losing his second singles match of the week to forced a tiebreak decider.

With Jamie Murray and partner Neal Skupski in charge, the Brits emerged with a 2-1 score against combative Kazakhstan and lined up a Friday date against Germany. 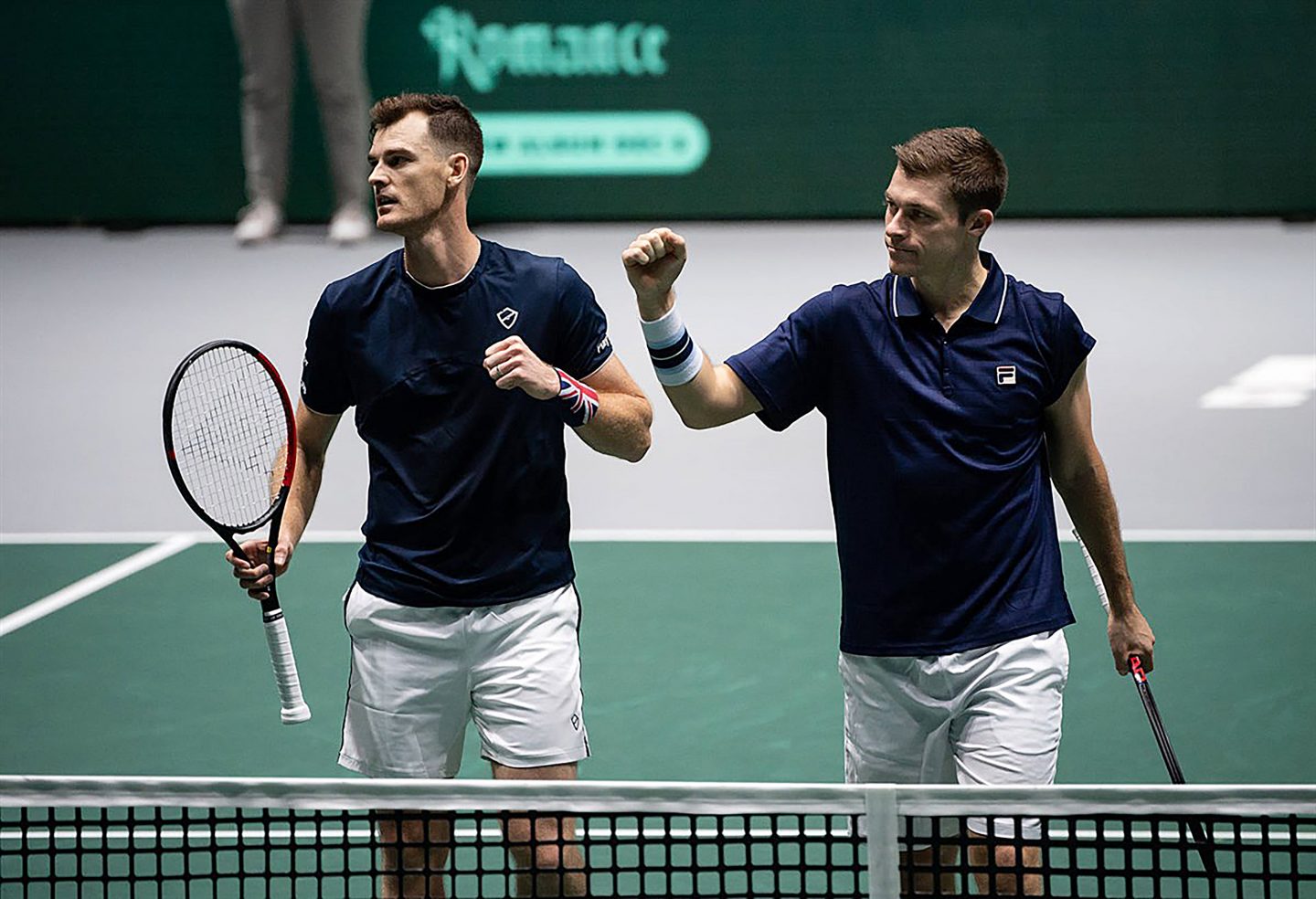 Kyle Edmund started the Brits off on the right foot as he beat Kukushkin 6-3, 6-3 in an our and a quarter. But Evans let go of a set and a break lead over Bublik to send the match into a doubles deciding rubber.

The Brits will Friday take on Germany, which defeated Chile as Philip Kohlschreiber clocked his 20th Davis Cup singles win after a dozen years in the competition, defeating Nicolás Jarry 6-4 6-3 in 68 minutes to finish off his afternoon. 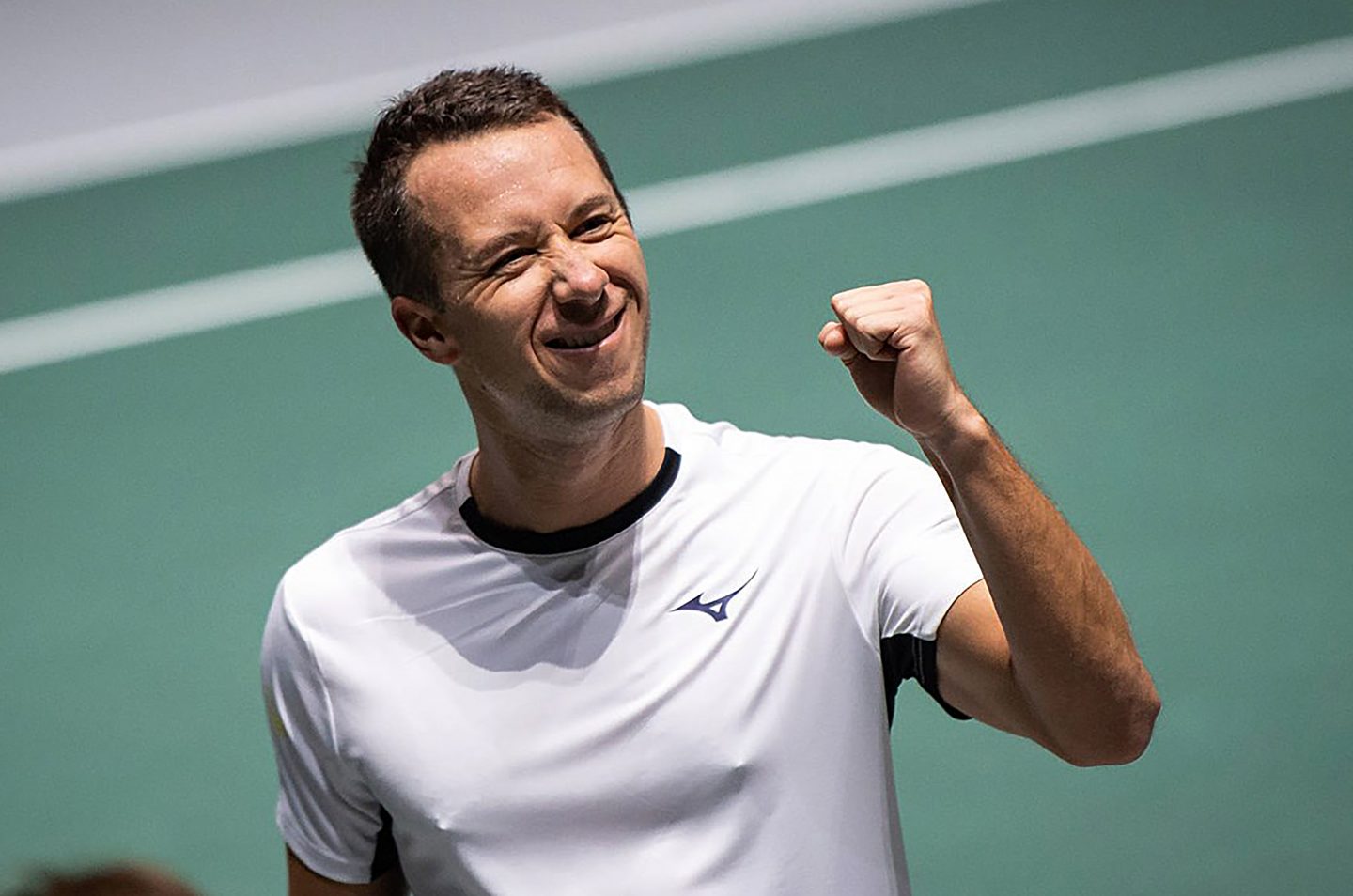 Mathematically, the win was enough to insure Germany ending top of the group with Argentina second and the Chileans eliminated.

“I think I’m one of the oldest players here in Davis Cup. I really enjoy it. It’s a great team,” he said.

“We knew we had to make one point today so it’s good it was the first one because you never know, Chile’s already out of the competition, maybe play very loose and we didn’t want to have a doubles or a second singles getting close, so we’re very happy.”

Novak Djokovic claimed the winning point for Serbia to move into the Davis Cup quarter-finals on Wednesday as he easily dispatched France’s Benoit Paire 6-3, 6-3.

The Madrid victory by the world No. 1 insured an unbeatable 2-0 score as an entire Davis season is condensed into a one-week sprint which has drawn criticism for late-night finishes – one of which ended at 4 am on Thursday.

Djokovic finished the singles job that teammate Filip Krajinovic had started with his 7-5, 7-6(5) defeat of Frenchman Jo-Wilfried Tsonga, who lost with 38 unforced errors, 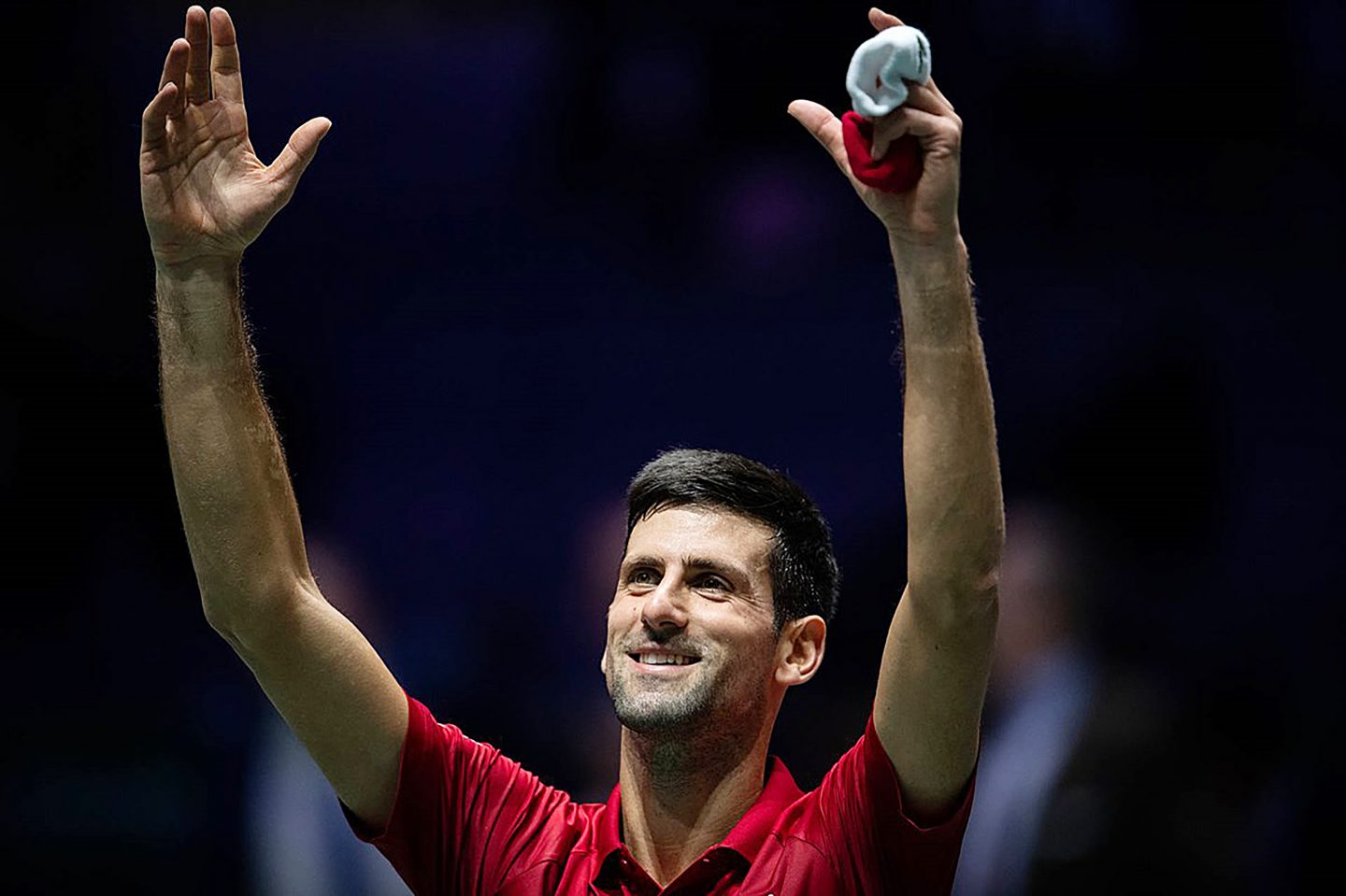 France finished runner-up a year ago in the classic home-and-away Davis format to Croatia, but both of those sides are now out of the new-look event in Spain after group play.

Serbia will now prepare for a Friday quarter-final against Russia.

“The team is looking good, we won all six sets yesterday, it was important getting a clean sheet against Japan coming into today’s match. Filip definitely gave me wings with his win, which was quite amazing,” Djokovic said in victory.

“Tsonga was playing well and in good form and Filip was just fantastic on the court today. Credit to him.”

Djokovic, who was flattened at the ATP Finals in London last week by Roger Federer in a final group match, said that he played well against the millennial-bearded Paire.

“Benoit started very well, he had some break points in the first game; I managed to save those and I made crucial breaks at the right time in both sets,” Djokovic said.

“He can come up with some amazing winners, so I had to stay focused all the way through.”