Ash Barty is the real deal

Ash Barty is no ‘surprise’ package, as some commentators may argue. The talented 23-year-old from Queensland was spotted as a future star eight years ago when she won the Wimbledon girls title.

And as a 14-year-old she was invited to Las Vegas to learn from Steffi Graf and Andre Agassi.

Barty got specialist tuition from Agassi’s former coach and fellow Australian Darren Cahill and the tennis world watched on, thinking this was Australia’s next great player.
Then she quit. Burnt out at 18 and desperately homesick. 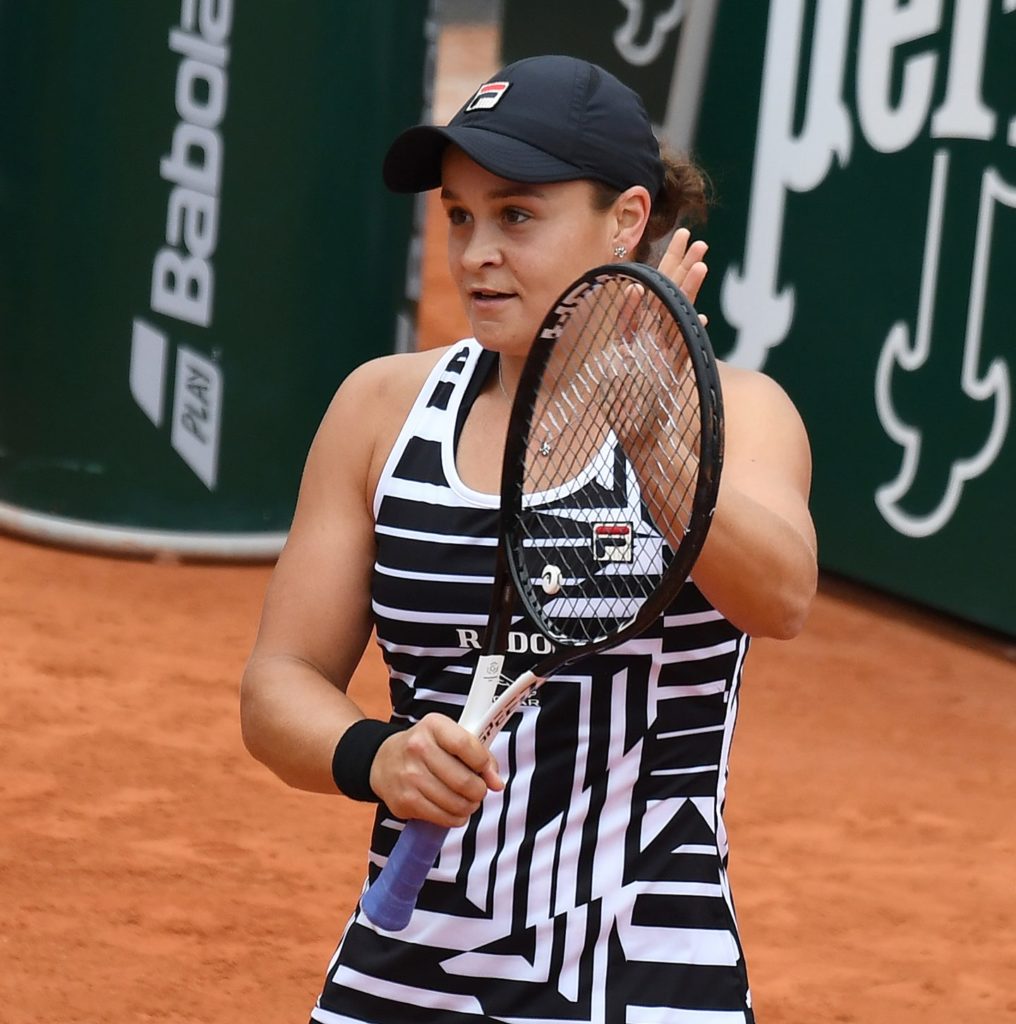 The global game that tennis now is was too much – and to be honest it could crush many a player, such are the expectations. She admitted in her press conference after winning last night, “it’s not a normal life”.

And the girl labelled the next Martina Hingis quit in September 2014, and went off to play cricket.

Having never hit a ball in anger, she took to the game like a proverbial duck to water.

“I’ve never seen anything like it since and probably never will.

“She’s a freak from that perspective, in how she transferred her skills across.”

But 21 months later, tennis came calling again, and tennis is what makes this young lady tick. And Barty, had never really ‘given  it away’. “I was still hitting balls – just not competing,” she said.

“I’m a tennis player through and through. I just had to see that for myself.

“I walked away and thoroughly enjoyed cricket. It was a gradual progression for me, during those two years, to want to come back to the sport I had played and loved since I was five years old.”

Add in a coaching mentor from her beloved Richmond Tigers AFL club to get her mind ‘straight’ and the rest, as they say, is history.

From a ranking of No.623 on her return, Barty cracked the top 50 for the first time just a year later. An amazing climb.

And what is it about her that makes her possibly the next ‘big’ name of the women’s game? Someone called it her ‘ability tom play chess on a tennis court’.

She has a shot to cover and counter virtually any challenge – an extremely rare talent.

And remember, she has been unbeaten in six singles and doubles rubbers while leading Australia to its first Fed Cup final this year since 1994.

She has won more matches during 2019 than any other player in the world.

The last Australian woman to win at Roland Garros was Margaret Court in 1973. Yes, that long ago.

Evonne Goolagong Cawley (one of her heroes) and Samantha Stosur both lost in the women’s final. But Barty was in control throughout – as dominant as you will see from any women’s performance this year.

A new ranking of No.2 will almost certainly follow tomorrow.

MICHAEL Chang said in Paris last week he expects more players to use underarm serves. Remember Chang’s one and only underarm 30 years ago – in a famous victory over Ivan Lendl at Roland Garros?

The American, then 17, stunned Lendl in the fifth set in their fourth round clash before going on to win his only slam title.

But underarm is back – or it is for some … Australian Nick Kyrgios and Kazakhstan’s Alexander Bublik are just two who have uses it to their advantage.

“So the guys are starting to go ‘Well, if the players are willing to go that far back, what’s the good shot to hit against them, a drop shot. So why don’t I do that on my serve?’

“Bublik did it three times against Dominic and I think he won two of the three. But if they’re 15 feet behind the baseline, I think that does warrant a thought of how effective that serve can be. If you hit it well, it can be really effective.”

Those of us old enough to remember will recall how Lendl was shocked by Chang’s underarm serve in 1989.

“I felt like I was losing my serve and I was about to lose my serve again,” Change said.

” I couldn’t serve my first serves, so I felt like I needed to try something different to try and win points. It’s the only time I’ve ever done it, ever in my entire career.

“It’s part of the history I think here in Paris at the French Open. My match with Ivan is a match that is difficult to describe.

“It was an incredible match. It’s a story you can tell your children before they go to sleep. Most of those stories are not true, but this one happened to be true.”

BRITISH No.1 Johanna Konta threw a towel and wristbands to fans after emphatic quarter final win over Sloane Stephens – and left the remaining
towel on her bench. Memo to Serena!

TENNIS legend Martina Navratilova and TV pundit was made to retrace her steps by eagle eyed security when she exited the elevator at the wrong
stop coming down from the fourth floor TV commentary booths atop Suzanne Lenglen court – looking for the bathroom – and tried to take a short cut
through the photographers workroom.

She was told – in the favourite French “jobswsorth” parlance “vous devez fait la tour – you have to go round.” The short cut was probably ten yards. We hope she made it in time to tend to the needs of nature! 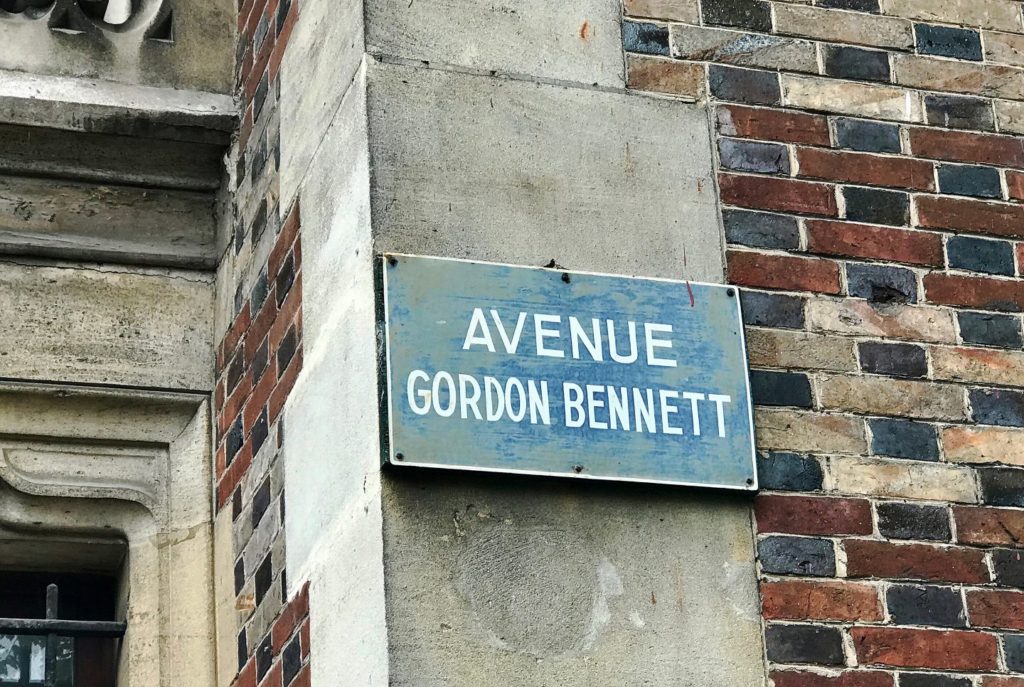 APOLOGIES to our non-British readers but you’ve probably heard the expletive “Gordon Bennett” in the UK. That ‘wow, what the hell…’ comment.

So who was Gordon Bennett, and what’s his connection with the French open tennis?

The address to find the home of the French Open Tennis is Stade Roland Garros  Avenue Gordon Bennett, 75016 Paris, France.

Gordon Bennett –probably when attending the French Open tennis tournament  must smile in surprise when they see one of the ‘Gordon Bennett’ has been used as an expression of surprise in England for at least 80 years.

Although the expression is probably dying out now, its origin remains one of the mysteries of the English language.   Is there a connection to this Gordon Bennett, labelled here as an American journalist who lived from 1795 – 1872? The answer is probably not – but it might refer to his identically-named son!

WE couldn’t let the week go by without a final note on that Dominic Thiem/Serena Williams press room debacle.

Thiem accused Serena of showing a “bad personality” after his conference was cut short to allow the American to take over the main interview room at Roland Garros.

Thiem, who reached his first grand slam final here last year, was discussing his third-round win over Pablo Cuevas with German language journalists when he was told he would need to leave the room.

The fourth seed was understandably unhappy, saying: “I don’t really get it, seriously. What the hell? But it’s a joke, really. What’s the point of that, that I have to leave the room because she’s coming?“

Williams, apparently, had a plane to catch and would not wait – hence why tournament organisers, keen not to upset her – pushed Thiem out.

Tournament director Guy Forget apologised to Thiem for the incident and, speaking to Eurosport, the 25-year-old was in no mood to forgive Williams.

He said: “I wasn’t angry or frustrated. Maybe for a couple of minutes or so. It is just the principle.”

Principle? In tennis? Good grief, we have gone back in time.

ROGER Federer found the Williams incident worthy of locker-room joke. With a grin, he said: “I thought that was funny. I don’t know what went wrong, but something went wrong for this to happen.”

“Maybe they should have kept Serena still in the locker room, not waiting here in the press centre. I don’t know exactly what happened. I understand Dominic’s frustration.”

For Thiem, “it’s just about, ’How in the world did this happen?“’ Federer said. “I don’t think he’s mad at Serena or anybody.”

Thiem, too, was finally able to laugh about the incident. “We joked about it,” Federer said. “That’s why I’m very much aware of what happened, and that’s why we are laughing in the locker room about it now.”

IT’S  been a superb 2 weeks in Paris, albeit a few days of rain, and tennis fans will take home many memories of another great Grand Slam tournament.  The changing of the guard in the Women’s event – as a cluster of new, young, bright stars aim for that top spot.

Naomi Osaka’s run came to an end, and Ash Barty is clearly the new rising force – but we also saw possibly the end of the Williams’ era as new young talent from the US ‘treadmill’ of tennis comes through.

Anisimova is one and there are others ready to join her.  Britain’s Johanna Konta needs to learn to kill off an opponent if she is to win a major, and Kenin, Vondrousova and others are all starting to make their claims.

In the men’s, Rafa is clay – and while Thiem also favours the red dust, to be world No.1 you also have to master grass and hardcourt. There are a few names starting to emerge, but it’s nowhere near as volatile or changing as the women’s game.

Federer and Djokovic are not getting any younger – and while Thiem and others (Tsitsipas is one) emerge as genuine contenders, one gets the feeling the ‘old guard’ is here some at least another year, or two!

And so to Wimbledon, the smell of freshly mown grass, those strawberries and cream, to hell with the London Underground’s absurd health warnings, and a British crowd that is, well, British.

See you all in a few weeks!!

AND finally… snap! Tennis fans would have seen double at RG late last week as Nike’s Parisian glamour show came to a climax with both Amanda Anisimova and Simona Halep dressed in the same outfits. Past has always been the more colourful Slam event, with Wimbledon still very conservative, trying to preserve its whiter than white appeal. 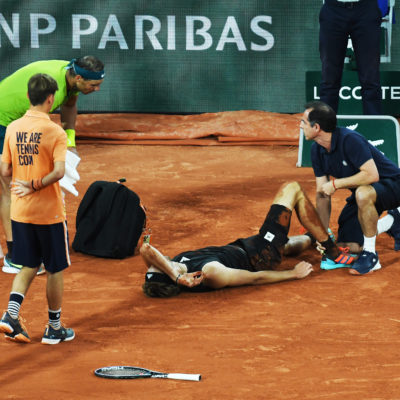