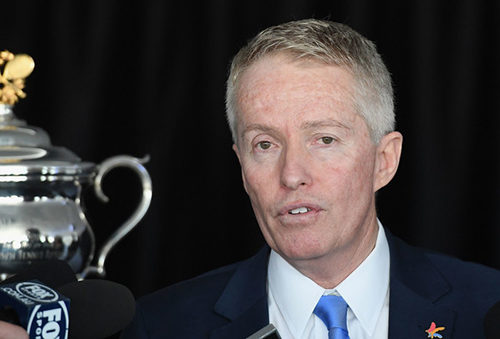 Next month’s virus-delayed Australian Open may not be home and hosed as government health officials take a close look at plans as COVID cases start to rise slightly in Melbourne.

The Age newspaper suggested on Wednesday that warning lights are flashing after a spectator at the Boxing Day cricket test at the nearby Melbourne Cricket Ground tested positive,

Implications for Melbourne Park, just across a railway yard from the cricket venue, could be serious; co-incidentally, the city also opened a virus testing site at the MCG on Wednesday.

Around 1,100 players and limited support staff are due in Melbourne late next week for a 14-day lockdown period prior to the delayed first Grand Slam of the uncertain 2021 season.

“I think we’re going back through all the major events that are planned in the next couple of weeks and just looking at some of those again just to make sure,” deputy chief health officer Allen Cheng told the Age.

“With the Australian Open, we still have a little bit of time.”

Open TD Craig Tiley’s staff have already organised up to 18 aircraft to ferry in players from Dubai, Singapore and LA.

“The process that we have for the players that are arriving is they have to be tested before they leave, there’s testing that will take place every single day [and] they remain in isolation for the 14 days (Melbourne hotel rooms),” Tiley told explained to host broadcaster the Nine Network:

“We’re very confident that we’re going to come out of this meeting our objective of ensuring the safety of everyone.”

“We would follow the advice of the government at that time and if they decide that the community spread is significant and (we need) to run the event with zero fans, we’ll run the event as such,” Tiley told radio 3AW.

“Every day we have a rethink on everything.”