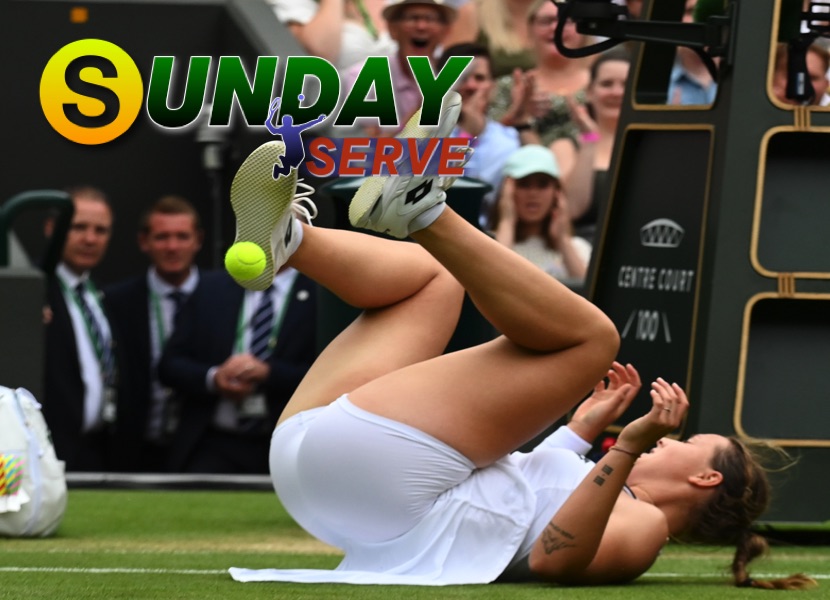 WHY has it taken so long? Wimbledon last week announced its all-white rules are set to be changed.

Players at SW19 have been required to wear clothing that is almost entirely white from the time they enter the arena to the time they leave for more than a century.

Firebrand Aussie Nick Kyrgios defied the rules in July and was given a ticking off by officials, but now the strict dress code is to be altered to be more considerate for female players.

Under the current guidelines, the room for movement is minimal with it stating:

“Undergarments that either are or can be visible during play (including due to perspiration) must also be completely white except for a single trim of colour no wider than one centimetre.”

So to be 100 per cent clear on this matter: the dress code for players will remain white.

We’re talking about the undershorts, the undergarments female players wear under their skirts.

Many players have spoken out over the need for change with many skipping menstruating over fears of embarrassment.

Aussie Daria Saville was one who revealed last week she had to “skip her period around Wimbledon”.

“Recently just being at Wimbledon, I was talking with my friends saying that I love the all-white look. But then a few girls said they hate it because it sucks to wear all white while being on your period,” she said.

“It’s true, I myself had to skip my period around Wimbledon, for the reason that I didn’t want to worry about bleeding through, as we already have enough other stress.”

Andy Murray’s mum Judy had long been a critic.

“I think it’s certainly a much more open talking point, but it would probably need more of the players to speak out openly about the trauma it can cause you,” she once said.

“If you are wearing all white and then possibly have a leak while you’re playing. I cannot think of a much more traumatic experience than that,” she said.

Wimbledon chiefs are set to scrap the undergarment rule for female players, allowing them to wear different colour underwear.

The change will come into effect in 2023 and onwards and will also impact the bras female players can wear.

Perhaps, with a female chief executive, the once stodgy, and outdated all-male committees that have run Wimbledon for decades, we can see some progress, as one wag put it, into the 20th century!

THE answer is NO!

Ash Barty has confirmed – again – she has no intention mops returning to tennis.

“I’m not training to be an athlete anymore,” Barty told AAP.

“I’m not training as a job, I’m training for fun. I miss competing and challenging myself against the best in the world, but I don’t miss much that comes with it.

Barty also said she had no ambitions to become a commentator or play another sport.

“Never might be my new favourite word,” she added.

The Athletic reported Kane has held ‘several conversations’ with Raducanu to share advice, experiences, and ideas as she looks to rebuild her career.

Raducanu is also, says the London Standard, a fan of his team Tottenham Hotspur.

RAFA Nadal and wife Maria Perello have teamed up to produce a range of luxury fragrances.

As well as training and being a new father, Rafa and Maria unveiled a trio of luxury fragrances in collaboration with haute parfumerie Henry Jacques.

“I’m a very public person in my work, of course, but in my private life, one of the most important things—and what I consider to be one of my greatest successes—is that Maria and I have been able to have a really normal life,” Nadal told Vogue magazine.

“We’re taking the next step in our lives now, though, so we thought—why not do something together?”

MEANWHILE, Spanish tabloid newspaper Semana has got itself into a spot of bother after publishing images of Nadal and new-born baby on their front page.

With every media outlet these days having a social media presence, the images caused some criticism from users saying it was an invasion of the couple’s privacy.

“I’m a little uncomfortable seeing these, feel like their baby should have privacy. They haven’t released a photo yet”, one user said.

But others were delighted to see the images.

SERENA Williams has fuelled more speculation of an Aussie Open comeback after posting a video on Instagram in which she is training hard.

Whether she does appear in Melbourne is still as matter of speculation, but one thing that has been confirmed in the past few days is that Aussie TV Channel Nine has beaten off a late challenge from Channel Seven to secure the rights to broadcast Tennis Australia events until 2029 in a deal worth more than $425 million.

This year’s Australian Open women’s final was the highest-rating of all time, watched by an Australian television audience of 3.835million.

The men’s final was the highest rating in four years, with a domestic TV audience of 2.333 million viewers.

VICTORIA Azarenka had a surprise visit last week after she had posted on social media that her holiday was over and that she back in training.

She was visited by the anti-doping agency.

Azarenka, 33, who last competed in Guadalajara three weeks ago, went on a much-needed break, but no sooner had she returned and the dope team were on her doorstep.

“Posted a picture yesterday in my gym that my vacation is over – 6 am this morning anti doping knock knock knock (laughing emoji),” Azarenka wrote on Twitter.

AND finally …. Boris Becker is set to be freed and deported to this native Germany next month after a seven-month stint in jail.

Becker has been approved for a fast-track scheme which sends foreigners back to their home countries in what UK authorities say is a plan to free up resources in British prisons.

Unde ttnhe schem offenders can get big cuts in their sentence if they agree to go home.

Becker, 54, was sentenced to 30 months in jail in April after he hid £2.5m in assets while bankrupt.

The former Wimbledon champion has spent the last seven months in Huntercomb prison in Oxfordshire, west of London.