A week in review – and Rafa’s still undecided 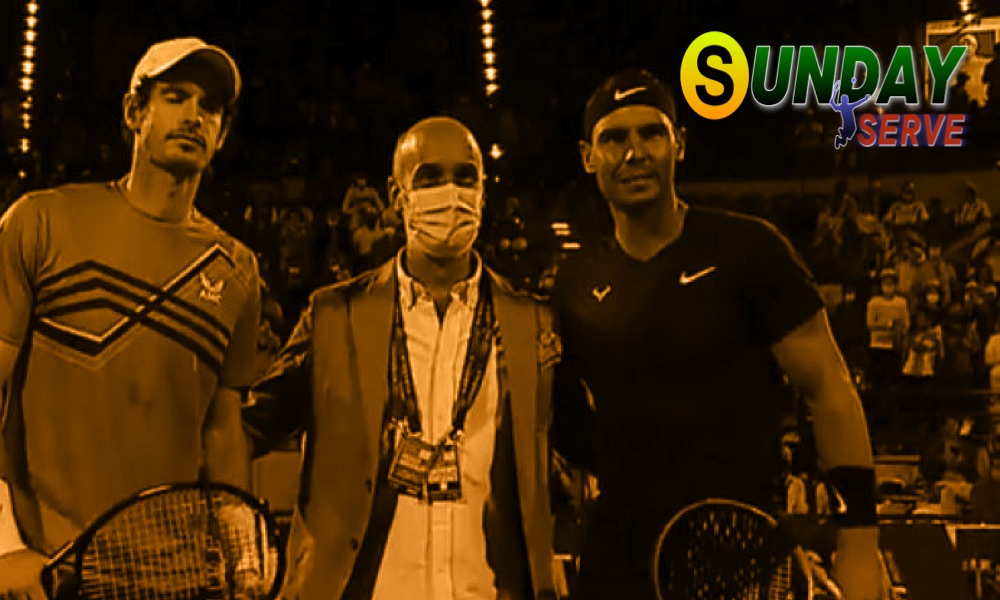 RAFA Nadal has only played 29 matches this year. It has been enough to keep him in the ATP top ten, despite a niggling foot injury that he has still not fully recovered from.

And he could become the latest in a growing list of absentees when the Australian Open begins in a few weeks time.

After losing to Andy Murray and Denis Shapovalov in Abu Dhabi this week he is already weighing up his options.

At 35, he is another of the famed old guard of mens tennis beginning to feel the effects of age.

“I need to speak with my team, and I can not guarantee anything about my Australia trip,” Nadal told reporters yesterday.

“The plan is to go there and try my best, but I need to go back and see how the body feels after these couple of days in Abu Dhabi.

“At this moment of my career and after everything I went through, I need to think wisely about every next step.”

The doubt is clearly there, but it is certain we have seen the best of one of the world’s greatest players.

WITHDRAWALS, withdrawals … Jennifer Brady has become the latest to pull out of next month´s Australian Open.

Australian Open officials confirmed the 2021 finalist would miss the event with to a left foot injury.

Brady made her first Slam final in February, in straight sets to Naomi Osaka.

She has not played competitively since Cincinnati in August.

Her omission comes after world No. 4 Karolina Pliskova announced this week she would not be participating because of a right hand injury picked up during a practice session.

“Karolina broke her radius… in a fitness room at a training camp in Spain,” her husband and manager Michal Hrdlicka said in a statement.

“Some days are worse than others … but time and belief can heal everything,” Pliskova said, after posing for a photo with her right forearm in a bandage.

The treatment is expected to take about four weeks.

Canada’s Bianca Andreescu has already withdrawn due to a mental health concern, and 23-time Grand Slam winner Serena Williams is another absentee.

On the men’s side, six-time Australian Open champion Roger Federer is still recovering from knee surgery.

STAYING Down Under, world No. 1 Ash Barty picked up another award this week, crowned the 2021 world champion of women’s tennis by the ITF.

Novak Djokovic won the ITF men’s world title after winning the year’s first three slams of 2021 – the Australian Open, French Open and Wimbledon, missing out on the ‘golden slam’ to Daniil Medvedev in New York.

Barty won the award two years ago, bit still has a way to go to match Steffi Graf, who has won it a seven times.

BRITAIN’S top mens players will be in Aberdeen, Scotland this week to compete in one of British sport’s most celebrated rivalries: Scotland versus England.

In the Battle of the Brits, brothers Andy and Jamie Murray will join forces with British No.1 Cameron Norrie and Jonny O’Mara for Scotland.

The event takes place from December 21-22 at the P&J Arena.

Andy Murray will compete in all three sessions and older brother Jamie – the tournament director – will play two doubles matches on Wednesday.

CAMERON Norrie has a lot to thank coach Facundo Lugones for in 2021, but their relationship goes back further.

Lugones and Norrie were teammates at Texas Christian University, Lugones a senior when Norrie was a freshman.

AUSTRALIAN player Sam Groth is considering a move into politics, revealing this week he’s been approached to run in the Victorian State elections next year.

“Yes, I have been approached. I’m undecided and I’m weighing up my options,” Groth told Melbourne media of the approach from the Liberal party.

“Like many Victorians, I think it’s time for a change in government.”

IT came as no surprise to read of six players being banned for match fixing this week.

The International Tennis Integrity Agency has been investigating odd betting patterns on ITF matches for some time.

The players, from Morocco, were found guilty of match-fixing charges, including fixing elements of matches, receiving money and failing to report corrupt practices.

Players at lower level tennis events are often targeted by gambling syndicates based in Eastern Europe.

With prize money at a minimum and players battling to make a base living, they can easily become prey to these spot betting gangs.

One of those banned, Ayoub Chakrouni, had a career-high singles ranking of 1,098.

“It’s a great honour for me. I respect and admire the work of many coaches on the women’s Tour, so being recognised by my peers makes this award more valuable,” Conchita Martinez told Spanish newspaper Marca this week, after being named WTA coach of the year.

Martinez coaches Garbine Muguruza, who won three titles in 2021, including the WTA Finals in Mexico.

Muguruza said she felt 2021 was her best season. “I truly believe this has been my best career season, even though I haven’t won slam tournaments,” she said.

“Now I have managed to find a balance towards which I have worked a lot with my team: this victory shows us that work pays off and that we are following the right path.”

The accounts show the company has total assets of £26.68 million which include almost £14.9 million held in a bank account, more than £8 million owed by debtors and a £3.6 million ­investment portfolio.