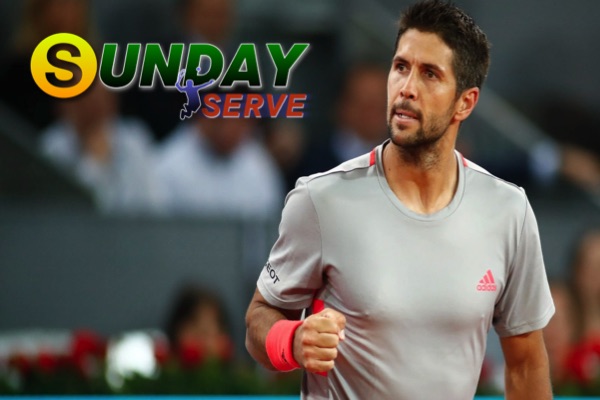 FORMER world No.7 Fernando Verdasco was been banned from tennis last week after being found to have used a drug to treat ADHD – Attention Deficit Hyperactivity Disorder.

The International Tennis Integrity Agency announced that Verdasco had been found with Methylphenidate in his system in February, at a tournament in Brazil.

But the worry among players worldwide is that it has only now been revealed that the treatment for some time did not have a Therapeutic Use Exemption, as many had believed.

Former player Pam Shriver, and current world. No 38 Reilly Opelka have both voiced concerns about its wider use.

‘Through grapevines of pro tennis, I hear that many players are on ADHD meds to help sharpen focus and concentration in a manner that brings up integrity questions,’ Shriver said last week.

Opelka questioned why players were taking Adderall (ADHD medication) for the first time in their life as adults.

“Legal doping,” he said on Twiter.

The London Daily Mail’s Mike Dickson was all over the story on social media, tweeting: “There has been a growing number of players applying for TUEs in relation to ADHD medication. The issue is coming under scrutiny not just in tennis but you hear in other sports, including golf.”

And Andy Murray argued back in 2016 that all exemptions should be made public.

From last year the ITIA stopped publishing lists. Why?

But a drug that actually aids concentration and focus is legal – in professional sport?

Too many questions and no answers – time for the ITIA to come clean and explain.

WIMBLEDON’S plans to extend with a new stadium and 38 more courts looks like being delayed further after meetings to consider the application have been pushed back to next year.

The Wimbledon Society is just one of many organisations objecting to the project, and they are now now calling for the whole plan to be resubmitted to Merton Council.

That would mean taking the entire plan back to the drawing board.

An extra 20 documents have been filed by the All England Club, with critics saying the whole process has become impossible to manage.

The Wimbledon Society has written to council planners suggesting that the AELTC should now withdraw and start afresh with a new application.

“It (the council) should also address the widespread local opposition to the current plans by not turning Metropolitan Open Land into an industrial tennis complex,” the letter stated.

And politicians from both sides have united to oppose the plan.

“We look forward to continuing our positive dialogue with council officers, elected representatives and the local community as the planning process progresses,” an AELTC spokesman said.

The whole project, which has been estimated to cost £200 million, could now be delayed by another two years.

ANGELIQUE Kerber, who turns 35 next month, wants to return to tennis after giving birth to her first child early next year.

And it’s not a matter of if she’ll come back, she said, but when.

“I don’t know what time or which tournament because I really want to take the time,” Kerber said.

“And when I come back, I want to come back 100 per cent, fit again and feel good. This is the plan.”

The 2023 US Open looks the best bet for a return, based on the return of Serena Williams.

Williams’ last match before giving birth was the 2017 Australian Open final in late January of that year.

Daughter Olympia was born on September 1, 2017 and Williams’ first match back was Indian Wells, in March of 2018 – just over six months after the birth.

DISHING out gongs for winning a tennis tournament. Whatever next? Emma Raducanu was made a Member of the Order of the British Empire (MBE) by King Charles last week. The 20-year-old was listed as being awarded the honour ‘for her services to the sport of tennis’.

“A great honour receiving an MBE from his Majesty the King today – pretty amazing day,” Raducanu wrote on Instagram.

NICK Kyrgios can’t keep out of the social media limelight. Last week he took to Instagram to brag about his impending “six-figure” payday as he prepares to play the Diriyah Tennis Cup in Saudi Arabia.

Kyrgios was asked why he wasn’t part of Australia’s Davis Cup squad by a user who wrote: @k1ngkyrg1os busy buying handbags again or something?”

Kyrgios hit back: “About to go to Saudi for 6 figures actually.”

It comes after the prize money on offer at the Diriyah Tennis Cup was revealed, with the winner scooping up $1 million. The runner-up will earn $500k and the semi-finalists will receive $250k each.

The news comes after Cameron Norrie was criticised for agreeing to play the exhibition event in the country given its human rights record.

Your thoughts on that issue Nick?

STICKING with Kyrgios and his absence from the Davis Cup, Aussie coach Lleyton Hewitt was asked about Kyrgios’ absence.

“I don’t know. You have to ask him. I can’t try any harder. I try and come here with the best possible team we could field,” Hewitt said.

Hewitt said he did his best to try to convince Kyrgios to compete at the finals but the 2022 Wimbledon finalist had other priorities. Saudi Arabia perhaps?

AUSSIE great Mark Woodforde want Tennis Australia chiefs to bid to take the Davis Cup tennis back to Australia after the success of Lleyton Hewitt’s team in making the final in Malaga.

“Tennis Australia should step up and put in a bid for hosting,” the 17-time grand slam doubles champion and former Olympic gold medallist told AAP in Malaga.

“Like any country, if they’re keen on hosting and welcoming a group stage or even the finals, it’s open that they can.

“I know the value of playing at home is very dear. All the three finals I played were unfortunately all away, so I never got to ever have that joy of playing at home. But that possibility is there for Australian players.”

The two finalists – Australia and winners Canada – have earned an automatic place in next September’s group stages, bypassing any qualifying ties.

The group stage venues have yet to be decided – Australia is deemed to far away from the Euro-centric event – the final will again be in Malaga next November.

QUOTE of the week: “Mom, you don’t play tennis any more.”

Olympia Williams informing mom Serena that she wants to spend more time with her now that the gruelling tennis training/playing program is over.

“It’s funny … but it’s good because little kids really want to be with their parents,” Serena told The People podcast.

“And I just feel fortunate that she wants to be with me. That’s kind of how I look at it, [because] she could feel a different way, and I’m glad she doesn’t.”

AND finally … Rafa looks like is winding down his career after telling fans in Mexico City a few days ago it is unlikely he play there again.

“It will most likely be the last time I play in Mexico, Acapulco 2023 is not on my calendar and the 2024 season seems far away,” Nadal said.

“Now is the time to enjoy this moment to the fullest and play in an emblematic setting, with many people and in a country where I have always felt loved.”