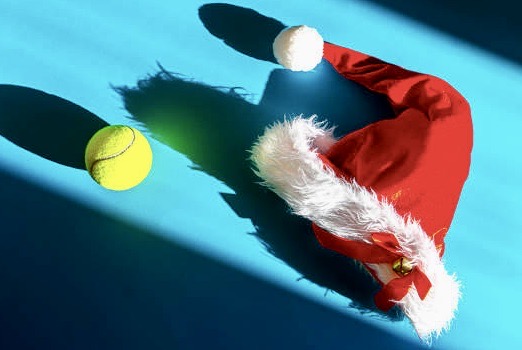 So, this is Christmas …

… And what have we done? Another year over and tennis fans have survived another turbulent year.

A year that started later than usual as players posted images of themselves on social media, locked in quarantine Down Under.

Hotel room workouts became all the rage, masks the dress of the day and fans came, then left, then came back to watch a February start to the Slam season.

Serena delighted us all with a family photo from the airport, masked and menacing – well almost – before she too was whisked off to a high security suite somewhere in the CBD.

Some arrived to discover they had been infected in-flight – no outdoor training sessions for them. No, straight off to a 14-day isolation camp, with little assistance by way of preparation for a major tennis tournament.

In all, 26 players in the women’s singles were quarantined.

Nine quarantined players, including past Australian Open winner Angelique Kerber, lost in the first round.

The men’s singles draw had more quarantined players (29), with the only seeded player among that group was No. 25 Benoît Paire, and none faired well.

When play did start – weeks later than scheduled – a few fans trickled in to watch before another case a thousand kilometres away forced a major five-day snap lockdown as Victorians prepared to become the most locked down region on the planet.

Then we moved on, or so we thought we would. Spring in the Californian desert was cancelled – then ‘postponed until a later date as health officials around the world struggled to make sense of extreme computer modelling that predicted a pandemic as worse as the Spanish flu a century ago.

Thankfully that did not come pass and Paris returned to its more regular spot after the autumnal event of 2020.

But there was a scare as organisers were forced t push back the start date as France entered another national lockdown.

At the start of the tournament on May 30, the main courts were capped at 1,000 spectators, and spectators were prohibited after 9pm due to the nationwide curfew.

Night session matches were held behind closed doors in empty arenas before the curfew was lifted to 11pm a week later, and 5,000 fans were allowed in to watch.

During the men’s semi-final between Novak Djokovic and Rafael Nadal on June 11 Prime Minister Jean Castex personally phoned the organisers after a 93-minute third-set tiebreak set to issue an exemption, allowing the match to be played to its conclusion with spectators.

The decision by French organisers to stage matches at night did lead to some farcical scenes as fans were thrown out of Roland’s Garros as the 9pm curfew hit.

Williams was dressed in fancy lime green outfit, with matching shoes – which carried a number of messages including one in French – “je n’arreterai jamais,” which translates to “I will never give up”.

Williams became the oldest woman to reach the fourth round at the French Open in the Open Era before she bowed out to Elena Rybakina and one Coco Gauff became the youngest player to reach a major quarterfinal since Nicole Vaidišová at the 2006 French Open.

In the men’s draw it was really down to two men – and they met in the semis, where Djokovic got the better of clay master Rafa Nadal to eventually go on and win his second Slam of the year, defeating Stefanos Tsitsipas in a five set thriller.

After Paris the tour moved to England, where the year before had seen no tennis as Wimbledon announced it had insurance to cover its multi-million dollars of losses.

This was the final edition of Wimbledon to have no matches scheduled on “Middle Sunday.”

The Championships were initially held at 50 per cent capacity, before increasing to full capacity in the second week.

But spectators were required to have tested negative for COVID-19 within 48 hours prior to attendance or to be fully vaccinated.

And despite the restrictions the event made a healthy profit.

Barty had held her No. 1 spot with such a healthy WTA points lead, she wasn’t challenged all year.

All participants were housed in a five star hotel on London’s south bank and transported daily the few miles to Wimbledon.

No, private houses for the stars as ‘Bubble Tennis’ became the norm.

Sadly for the Swiss icon, he was upset by 14th seed Hubert Hurkacz in the quarterfinal in straight sets, the first time in 19 seasons he had been beaten in straight sets.

Another iconic name linked to Wimbledon 2021 for the wrong reasons is Serena Williams, limping out of the tournament in the first round against Belarussian Aliaksandra Sasnovich on June 29. She hasn’t played a major since.

With pandemic numbers climbing the US Open had been in doubt for months, but the 141st edition did eventually get under way in New York on August 30.

But like all events, it too was not without controversy and upset.

Which left the field wide open in the women’s singles.

And suddenly the world woke up – to the fairytale of New York.

Most will forget who won the mens singles – Medvedev halting Djokovic’s claim to a ‘Golden Slam’.

But almost everyone will remember who won the women’s singles – a kid from nowhere – an 18-year-old from London called Emma Raducanu.

Raducanu beat fellow teenager Leylah Fernandez 6-4, 6-3 to become the first qualifier, male or female, to reach a major final and win a major title, as well as the first singles qualifier to reach the semifinals at the US Open.

The first Brit since Virgina Wade in 1977 to win a Major and only the second player on her but to win the US Open. Canada’s Bianca Andreescu in 2019 being the first.

It was also the first all-teenage final since Serena Williams and Martina Hingis in 1999.

Everyone suddenly wanted to know this smiling young woman with a Chinese mum and a Romanian dad who lived in a southeastern suburb of London, who a year earlier had never been heard of outside of British junior championships.

An achievement never seen before and one we will almost certainly never see again.

Well, you can’t really. Emma loved the limelight, the sport of tennis loved the interest it was now getting on a worldwide basis as we moved west to California and that long postponed date in the desert: Indian Wells.

Sadly for Raducanu the party quickly came to an end but not for the Brits, as Cameron Norrie became the become the first British man to win the Indian Wells Masters and earn his first ATP Masters 1000 title.

Paula Badosa was another unlikely winner of the women’s event, the Spaniard beating Victoria Azarenka in three sets.

Hopefully Indian Wells will be back at its normal slot in the tennis calendar in March of 2022.

End of years finals saw the year comer to an end – a season that saw eventually, plenty of tennis and plenty of upsets.

With Covid hitting player training routines some didn’t make events, others showed up, but didn’t get off the bus to play.

Turin hosted its first ATP Finals, having nicked it from London, with Alexander Zverev beating Daniil Medvedev 6-4, 6-4 in a pretty uneventful tournament.

Zverev was a surprise winner over Djokovic and Casper Ruud showed he will be a force to be reckoned with in 2022, but it just seemed as if the trials and tribulations of a turbulent year had lasted a month too long.

The WTA Finals were more appetising, having ben switched from covid-hit China to Guadalajara in Mexico.

Again, not without controversy as No.1 Ash Barty withdrew. The strict quarantine rules back home in Australia would have seen her drastically reduce here preparations for Melbourne in January, although her camp tried to hide that by claiming the high altitude of Mexico was the key reason.

Strange that no other player experienced such a problem.

A couple of late withdrawals saw a quality line-up contest the event with a few upsets en route to a final that saw Garbiñe Muguruza beat Estonian Anett Kontaveit in straight sets.

Other notables included Iga Świątek becoming the player first born in the 21st century to qualify at the Finals.

Covid continues to haunt as players return from a money-spinning Abu Dhabi event with the virus and Australia’s tough covid rules continue to ask questions of many stars – notable one Novak Djokovic.

Will he play, or will he start home in Serbia?

And so to Christmas…

We hope you have enjoyed reading Grand Slam Tennis during 2021.

The news, the views, the great pictures.

We are already preparing for Melbourne in a few weeks time, so a very Merry Christmas to you all and we will see you Down Under in 2022.