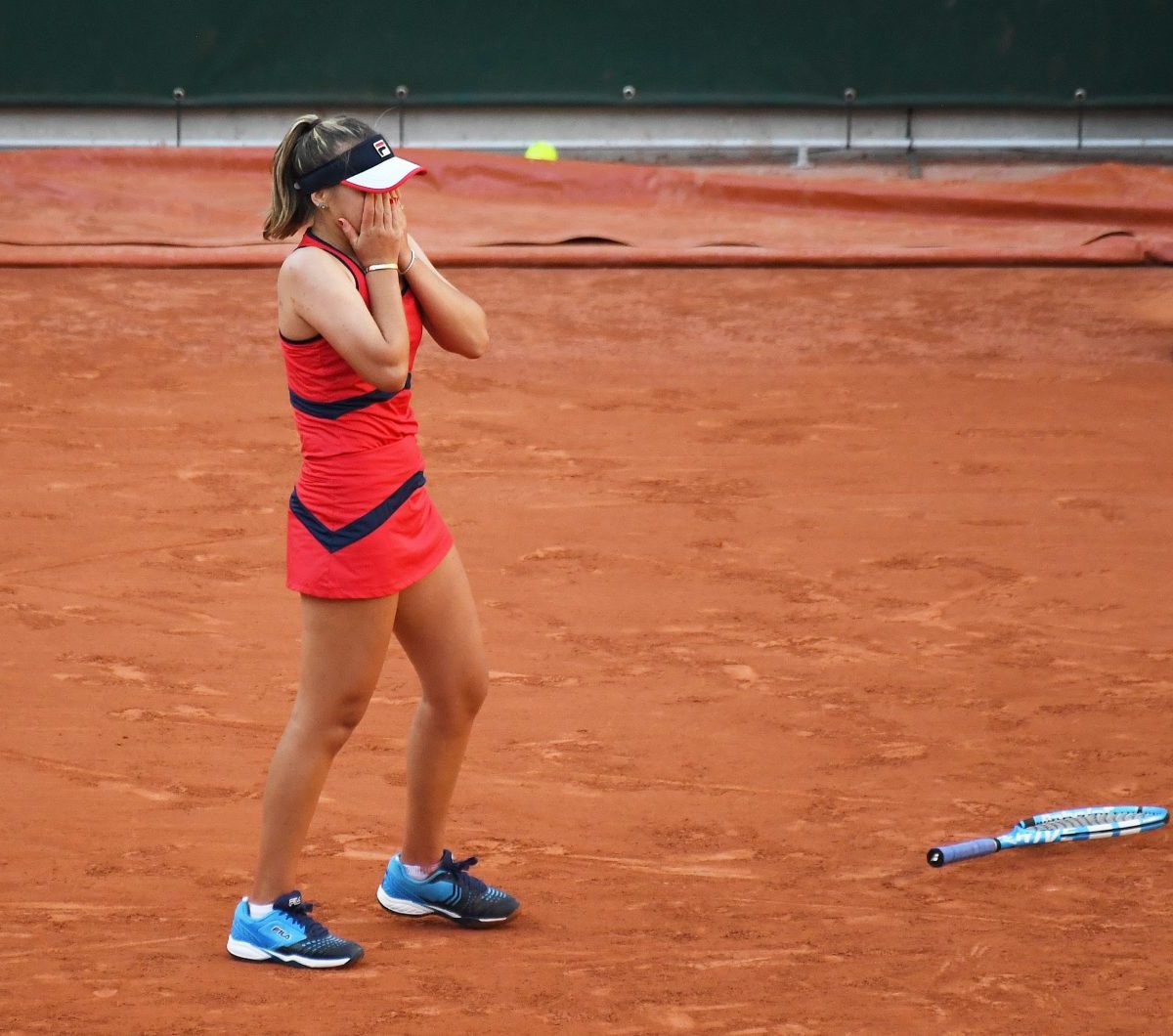 Three-time champion Serena Williams was defeated by 20 year-old American Sofia Kenin 6-2, 7-5 to lose another chance at trying for a record 24 Grand Slam title.

Williams, who suffered through a dismal clay tune-up last month, accepted her defeat.

“I wouldn’t expect to have gotten only to the third round, “In that first set in particular, she hit pretty much inches from the line.

“I haven’t played anyone like that in a long time.”

A third straight slow start in a French Open match proved disastrous for Naomi Osaka on Saturday, with the top seed and double Grand Slam winner bundled out 6-3, 6-2 in the third round..

Unheralded Czech Katerina Siniakova did the damage, eliminating the winner of the last two majors in New York and Melbourne.

“I’m very disappointed in how I played, and I wish I could have done better. But I can’t turn (back) time, so…

“I just feel like there has been a weight on me (here). I’ve played French Open before but not in this circumstance or situation.”

Despite the loss, she will hang onto the top WTA ranking; her winning run at the majors was ended at 16 as she lost with 38 unforced errors.

Osaka had been playing in the danger zone since the start, losing the opening set in each of her previous matches but managing to squeeze out wins.

Her luck ran out against Siniakova, who won the doubles title here a year ago and is into the fourth round of a Grand Slam for the first time.

Siniakova, ranked 42nd, earned her first  win in three tries over a reigning No. 1 player.

“It’s so incredible, amazing, this is a thing that I cannot believe,” the 23-year-old winner said.

“”I’m so happy. I’m playing my best tennis, I hope it will continue.”

Siniakova got into position in the opening set, saving all seven break points she faced and then breaking the seed for 5-4. A game later she had the set in her pocket after 46 minutes.

The Czech broke for 3-2 in the second set and consolidated for 4-2 as the fire seeped out of Osaka’s game.

A break for 5-2 on an Osaka double-fault sealed the fate of the Japanese top seed, with Siniakova serving out the biggest win of her career a game later after 77 minutes.

Osaka had not lost at a major since going down to Angelique Kerber in the Wimbledon third round 11 months ago; she then owned  the US and Australian Opens back to back..

Paris holder Simona Halep kept up her bid to repeat as Roland Garros champion with a 55-minute rout of Lesia Tsurenko, reaching the fourth round 6-2, 6-1.

The third seed kept a flawless record in the series, winning her seventh Tour level match against the 27th-ranked Ukrainian; it was their first meeting on clay.

“To be honest, I expected a tough one, because always when I played against her, I’ve been in trouble during the second set,” Helep said.

“She was hitting really strong and wanted to finish the points fast. That’s why she missed that much.

“I had to stay very strong, to play more aggressive and stay closer to the baseline.

“Today I played better and felt better on court.”

Halep said she conquered her early nerves: “Before the match, I was really nervous. I have big emotions, but it’s normal.

“I’m here again. I’m feeling good, and I have expectations for myself to play good tennis.

“After a few games, I was free emotions, and I could focus on the match.”

Elina Svitolina is working to heal a knee injury which limited her clay season and could affect her chances on the grass.

The Ukrainian who keeps a flat in her former base of London, exited the French Open in the third round, going down to former Paris winner Garbine Muguriuza in straight sets.

The loss ended her abbreviated clay campaign after just five matches, leaving the No. 9 with worries over her knee fitness.

“I’ve been managing the injury for a while and against Garbine it felt the same,” she wrote in her BBC online column.

“I may need an MRI scan on my knee next week and see what is the best option going into the grass-court season.

“Of course there is a concern I might not play on the grass at all if a scan shows something really serious.”

Svitolina, a Wimbledon quarter-finalist at the last two editions, remains optimistic that with a month to go before the July 1 start at the All England Club, she can hopefully be ready.

She has entered tune-up events in Birmingham and Eastbourne “but it depends on my health.

“I think I will have enough time to recover for Wimbledon.”

Still, hitting the lawns without preparation can be a big ask: “Grass is tricky because you have to be ready for movements which could maybe damage the knee more,” she wrote

“It’s not been easy for the past two months. I need to see where I am now and take my time.

Svitolina dropped a personal nugget into her column, adding that while living in the British capital, she learned to drink her tea with milk.

“I’ve actually started drinking English tea – with milk. In Ukraine we don’t put milk in tea, we only have green tea. That’s the most British thing I’ve learned.”

Top seed Novak Djokovic remained undefeated against qualifiers at the Grand Slams, hammering No. 147 Italian Salvatore Caruso 6-3, 6-3, 6-2 for a rapid-fire win into the French Open fourth round on Saturday

The 24th straight win at a major for the Serb took just over two hours leaving Djokovic 19-0 against players from the qualies at the majors – with seven of those wins here..

The No. 1 extended his quest to hold all four Grand Slam trophies simultaneously, which he can  complete for the second time in his career (2015-2016) with a possible Roland Garros title next Sunday.

Djokovic has moved through in straight sets all week, spending five and a quarter hours in total on court.

“Caruso was a big challenge, with his backhand,” Djokovic said. “He was very motivated, he came to court with a clear game plan

“It was a straight-set win, but it was a lot tougher than the score indicated.”

2018 finalist Dominic Thiem was taken to four sets for a third consecutive match, with the Austrian fourth seed rid rising to the occasion 6-3, 4-6, 6-2, 7-5, over Pablo Cuevas.

Thiem lost to the Uruguayan veteran here in 2015 but insured there would be no repeat as he beat the South American for the fourth time in six meetings.

“I’m so happy right now, it was a long tough match with a lot of rallies,” Thiem said.

“Pablo is one of the best on clay, I’m happy to be through to the fourth round.”

History repeated itself for the pair, who also went five a year ago here; Lajovic has been riding the momentum from his surprise Monte Carlo final in April.

Stefanos Titsipas made more tennis history, becoming the 2nd Greek player (man or woman) to reach the fourth round here after it was first accomplished in 1936.

But the winner was annoyed by the stoppage:

“The fact that this Grand Slam has no lights, that’s the reason we stopped,.

“I feel like at 5-All (third set, Thursday evening) I had the momentum and kind of ruined it. So we both managed to win. I don’t know what to say.”

Tsitsipas will face off for the first time with treble Grand Slam champion and 2015 Roland Garros winner Stan Wawrinka, who reached the fourth round 7-6(5), 7-6(4), 7-6(8) over Grigor Dimitrov in another two-day match.

Wawrinka set a personal record, with the contest the 500th of his career. But the 34-year-old had to fight for his straight-sets success by saving five set points for Dimitrov.

The Swiss clinched his win after trailing  trailing 2-6 in the third-set breaker in a match played on a packed-out court.

“It was another great match, against Grigor it was really tough battle,” Wawrinka said.

“We both played well, I’m happy to have won the three tiebreaks. It was important victory for me, and I’m happy with it.